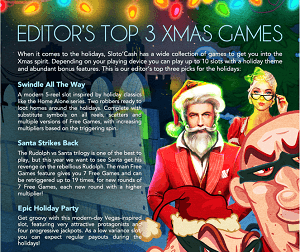 When it comes to the holidays, Sloto’Cash has a wide collection of games to get you into the Xmas spirit. Depending on your playing device you can play up to 10 slots with a holiday theme and abundant bonus features. This is our editor’s top three picks for the holidays:

Swindle All The Way

A modern 5-reel slot inspired by holiday classics like the Home Alone series. Two robbers ready to loot homes around the holidays. Complete with substitute symbols on all reels, scatters and multiple versions of Free Games, with increasing multipliers based on the triggering spin.

The Rudolph vs Santa trilogy is one of the best to play, but this year we want to see Santa get his revenge on the rebellious Rudolph. The main Free Games feature gives you 7 Free Games and can be retriggered up to 19 times, for new rounds of 7 Free Games, each new round with a higher multiplier!

Get groovy with this modern-day Vegas-inspired slot, featuring very attractive protagonists and four progressive jackpots. As a low variance slot, you can expect regular payouts during the holidays!


Other holiday slots to enjoy this season: 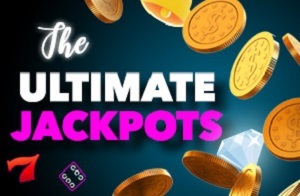 A Xmas to remember

EuroMillions is an international lottery shared by nine European countries. In December 2020, they announced there would be a guaranteed winner of minimum 175£ million! On December 11th, a lucky French resident bought a ticket that matched all five lottery numbers and the extra two star numbers, triggering a 184£ (Sterling Pound) million payout – the highest lottery win ever recorded by EuroMillions. Imagine the style of his Christmas celebration that year!

Unimaginable riches can be made during the holiday season at Sloto’Cash also. Feel the itch to try our progressive slots and make a fortune overnight? Play today to see if you are the next big winner! 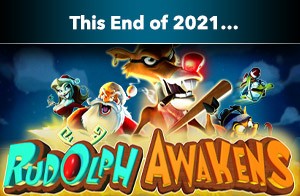 This December, have a ball at Sloto’Cash every weekend leading up to the new year by playing with a 77% match bonus and 77 free spins on ‘Rudolph’s Awakens’!

Help Rudolph in this alternate Christmas slot as he fights off Santa Claus for the title of Father Christmas! Who will take the prize?

Rudolph Awakens is a 30-line, 5-reel, online slot. This is a sequel to the ongoing series of slots that include ‘Return of the Rudolf’ and ‘Rudolph’s Revenge’. This series of slots are fun parodies of the Star War films and feature a holiday theme with a twist: Santa is fighting his rebel reindeer Rudolph.

Experience an action-packed holiday season alongside Rudolph, Santa and Mrs. Clause and play for your chance to get a payout of up to 50,000x on a single round!

Promo requires a $30+ deposit and it holds 30x roll over. Redeem TWICE per day between Friday and Sunday.