The truth about Keno Strategies

Keno is one of the most fascinating games inside casinos. It has an interesting history as we saw in a previous Sloto Magazine. It is a contender for being the oldest gambling game in the world. It was an early form of lottery that was developed in the Han dynasty in ancient China. A common myth states that the Great Wall of China was partially financed by the selling of Keno (a.k.a. lottery) tickets.

Keno is a game of chance. Players can pick a series of numbers from a card with 80 numbers. The game’s pay-table varies depending on how many picks you make. You can pick between 1 and 15 numbers. The highest jackpot is a 100,000 bet prize if you guess all the numbers that appear, while choosing 10 or more numbers.

On the internet and in bookstores you may find articles and books that claim to have winning systems for Keno. You often have to pay considerably high prices for these tips, as high as $100 for a small booklet or PDF file. The general consensus is that these systems are misleading, as there are no proven ways to win consistently at Keno. Like any game of chance, there is always a risk of losing.

We want to make clear that we have not yet discovered a bullet-proof strategy that is proven to mathematically reduce the casino’s house edge on Keno. Rather, what we present is in the form of tips, certain habits players have used in the past that worked well; but we do not claim these habits guarantee winnings.

1. Play only between 5 to 7 numbers. Keno experts claim this is the range where Keno has its highest return to the player. Increasing the number of picks will slightly lower the return to player.

3. The myth about hot and cold numbers. Do not guide your decisions based on the numbers that have appeared in previous rounds. Every number has equal chance of appearing as any other number in the next round because the new draw of numbers is always randomized.

4. Bet only within your budget. This tip is probably the best one and will keep your bankroll at its highest. By setting up a daily budget, you make sure you don’t overspend in a single sitting and have more funds to play on a future date! 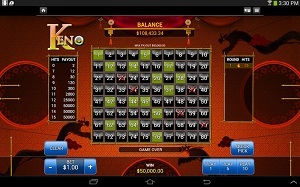 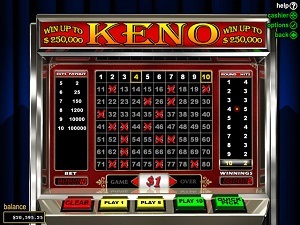