Christmas is almost here, and we can’t help but wonder: will we be receiving the biggest bonuses of the year this holiday season? Those sleigh bells are already jingle-ing!

There’s no need to wait for Santa’s reply. Christmas has officially begun for Mr. Sloto and he’s teamed up with Santa to give away early presents, including a 150% 1st Santa Bonus, a 2nd 200% Match Bonus and unwrap a $100 Gift After!

Santa knows Sloto players have been good all year long – and as a thank you has created the biggest rewards yet valid until December 31st for those who deposit as little as $25!

BIG Santa Bonuses are up for grabs:

Deposit offers require a $25. minimum deposit and they hold 30x slots or keno playthrough and no max cashout.  HOHOHO-100 free chip holds 40x roll over and $500 max cashout. Promotions must be redeemed in order! Valid until December 31st

In what has been a bumper year for Sloto, America's favorite casino destination has won yet another award, this time topping the VegasSlotsOnline.com list of the BEST USA CASINOS in 2015.

2015 has seen players flock to Sloto to enjoy a number of the site's new hit releases including Hillbillies Cashola, Lucha Libre, Ghost Ship, and The Three Stooges in Brideless Groom, as well as a number of old favorites including Cleopatra's Gold, Achilles, Pay Dirt and Texan Tycoon.

Speaking to Sloto, Mark Nelson the PR manager for VegasSlotsOnline said: "Winning our best casino award is no mean feat and clearly demonstrates the continued progress that Sloto' Cash has made this year in cementing itself as the players' number 1 choice of slot websites. To win this award, you need first class support, fast cash-outs, great games and above all else, a flawless reputation among players. Sloto ticks all these boxes and more, and as such is a deserved winner."

Sloto' Cash has big plans on the horizon including the release of several new games such as Pirate Isle and Bubble Bubble which are set to strengthen the games portfolio even further. Furthermore, we look to continue our mobile push with a number of exciting new mobile friendly games to be announced over the coming months.

With big plans for the present and even bigger plans for the future it's likely you'll be reading more success stories in the Sloto blog soon. Watch this space.

Before you know it, summer will come to a halt and for many it will mean time to head back to school, take on other near the end of the year resolutions and finally, start preparing for fall. With all these changes, the one thing that remains certain is that you can continue to count on Mr. Sloto’s out-of-control slots action with his September’s slots frenzy!

Hop on this crazy ride and prepare to cash in serious wins with two bonuses that are yours when you deposit as little as $25. Claim a 1st 150% Match, continue on to a 200% Bonus and say goodbye to summer with a $100 Free Chip!

Summer may be over soon, but the slots action continues to go on this autumn and beyond with Mr. Sloto’s exhilarating Slots frenzy!

Deposit offers require a $25 minimum deposit and they hold 30x slots or keno playthrough and no max cashout. $100 Free Chip holds 40x roll over on slots or keno and $500 max cashout. Promotions must be redeemed in order! Valid until September 30th! 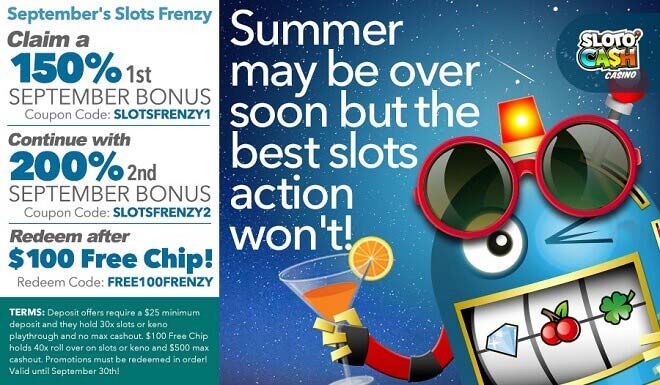