The Time of Bitcoin

Riding the waves of the future

The time of Bitcoin is coming…

Bitcoin is not entirely a new phenomenon although many people have yet to hear this word. It started as a cybernetic fantasy: anonymous programmer(s) set to create a new currency for the digital world. The idea was to make a currency that was controlled by no government or financial institution, a currency that had no physical form and existed only within computers!

Since its inception 8 years ago, it has traversed a long road of ups and downs, with many critics and disbelievers along the way. Today it is finally recognized as a real currency, and it is called: the first decentralized digital currency in the world.

So, what is Bitcoin?

A bitcoin is the unit of the digital currency. Just like $1 is a unit of value. A unit of Bitcoin changes value over time. It is regulated by the market. Over the last 12 months, a bitcoin has had a value between $500 and $1300.

In the beginning a Bitcoin had a very low value. In 2010 each bitcoin was worth only a few cents. It was in 2013 that its value started to rise and has been more or less stable ever since.

Some visionaries see this as humankind’s future currency. So having Bitcoin at these still early stages could be a great investment!

How do you get Bitcoin?

The traditional way to get bitcoins is through “mining”, a term used to describe how a computer solves algorithms (or math problems) through a Bitcoin mining software. But today, you can just buy Bitcoin at its market value, the same way you can buy Euros or UK Pounds using US dollars at an exchange office or site.

How do you use Bitcoin at Sloto’Cash?

Open a wallet to buy, send and receive bitcoins. You can set up a free wallet at various sites such as www.coinbase.com or www.bitstamp.net. From there you can purchase Bitcoins that you can later send to Sloto’Cash.

It’s cheap for deposits and withdrawals.

$30  min. deposit and 30x roll over with no max cashout. Redeem daily.

Enter Lucha Libre 2 and you’ll be entering the colorful, mysterious and fascinating world of Mexican wrestling in the sequel to the super popular Lucha Libre slot! Deposit $25 to face new rivals and acquire new winning moves with help from a 111% Match + 33 Free Spins!

Lucha Libre 2 features the most feared wrestler of all times: Taco Malo. But this time around, he squares off against a new opponent Nacho Friend. Landing the Expanding Wrestler Wilds grants you wins with up to 10 times multipliers. More coins are yours with three new finishing moves, bonus games, free spins and other wrestling winning combinations!

Come up with your best winning maneuvers on the reels of Lucha Libre 2 and you’ll be collecting instant wins with a 111% Match + 33 Free Spins!

Promo requires a $25 min. deposit and it holds 30x slots or keno playthrough and no max cashout! 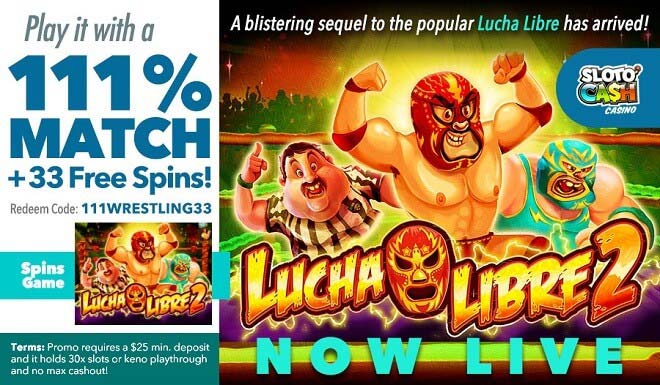 Is there any evidence that mythical beasts really exist? Do you believe animals and magic are the perfect mix? Or are you the type of person who’s crazy for dinosaurs? What about believing all three scenarios are possible and making a profit from your beliefs while you’re at it!

Deposit as low as $25 from now and until May 15th and you wont believe your eyes when a magical panda bear helps you create wins with a 100% Bonus + 50 Free Panda Magic Spins. Continue on the fantasy road when you win alongside everyone’s favorite monster with a 150% Match + 100 Free Loch Ness Loot Spins and end up in the Jurassic Era with 200 T-Rex Spins!

A magic panda bear, Nessie and a fierce dinosaur will join forces and help you amass wins when you deposit as little as $25 to play with 350 Free Spins! 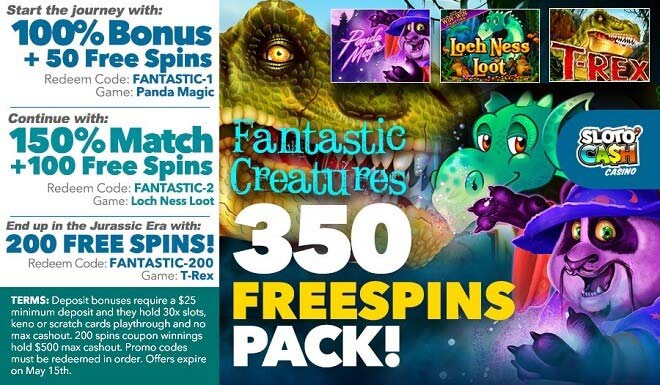 The life of Mr. and Mrs. Sloto