A short history of Thanksgiving

As many other holidays, Thanksgiving has a fascinating history. In a single lifetime, customs rarely change and we repeat the same traditions year after year. But when we step back and look from history’s eagle eye, we see that things were quite different in the past.

Thanksgiving started in 1621, when pilgrims invited local Native Americans to join a feast after their first harvest. It didn’t consist of one large meal, it was a festival that lasted 3 whole days!

[Did you know? There was no turkey, potatoes or pumpkin pie during the first Thanksgiving meal? There was also no Macy's Parade, no football games, and (gasp) no SlotoCash online casino!!! ]

The available produce in those days was very different from today. The participants of the first Thanksgiving had venison, courtesy of the Native Americans that hunted 5 deer for the occasion. Potatoes and pumpkin had yet to be introduced to New England (as the US territory was called in that time).

Thanksgiving did not immediately become a holiday. Americans had to wait until 1789 when George Washington declared the first national Thanksgiving Holiday. Still, it did not become a regular annual tradition until the American writer, Sara Josepha Hale, campaigned in favor of it for over 30 years, starting in 1827. She published, besides her famous nursey rhyme “Mary had a little lamb”, many recipes for Thanksgiving including pumpkin pie, turkey and stuffing.

In 1863, during the Civil War, President Abraham Lincoln declared that the nation should celebrate Thanksgiving on the final Thursday of each November. In 1939, President Franklin D. Roosevelt broke with this tradition since that year November had five Thursdays and wanted to move it back a week. After a lot of protest, F.D.R. signed a law that it would be celebrated on the 4th Thursday of November, a tradition that has been held since then.

Time to start your own traditions! While the dishwasher is humming away cleaning up the final remnants of a wonderful day of fun, family and food, login to the Sloto Cash casino lobby, and check out our seasonal promotions, new games, bonus slots and MORE! Sink into your fav easy chair and ENJOY - you deserve it! 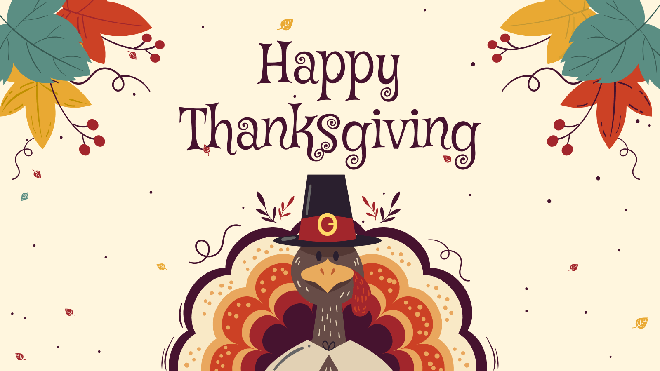