There's a New Sheriff In Town!

A new kind of Sheriff has made it to town and wants you to help him protect our casino while you chase off the bad guys! Kick off this new month with a serious bang and welcome September in the company of Mr. Sloto Sheriff as he rewards you with a 100% Bonus, followed by a 150% Match and topped off with a whooping 250% Match!

And in case that wasn’t loud enough for you, for helping him save Sloto’Cash town the Sheriff has also collected an extra $100 just for you that you can redeem for FREE when you’ve claimed all three bonuses!

Are you tough enough to help Mr. Sloto Sheriff lay down the law? It’s your turn to prove it as you collect a triplet of September bonuses and an extra $100 token simply for protecting Sloto’Cash from crooks, thieves and burglars! 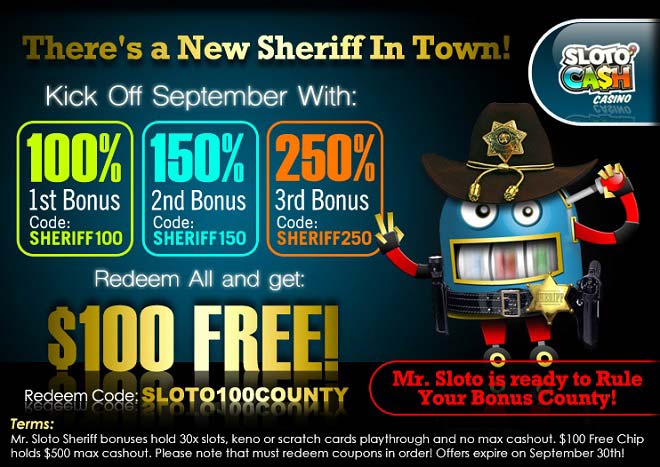 The Life and Adventures of Mr. Sloto

Chapter 1 - The luckiest man on earth.

Victor Fluke was born only child of middle-class parents, in a small suburb outside medium-sized city. Nothing of his circumstances would suggest that he was anything but an ordinary child. But early in his life people became aware that he was gifted with extraordinary luck.

Victor always seemed to be at the right place at the right time. At the early age of 6 he was playing with the family dog in the backyard. He was digging up holes just like old Ruffy. Right under their cherry tree Edmund struck something hard just one foot deep underground. It was a rusty metal can. He managed to open it to discover it was full of $5 bills!

Or take the case when he was 11, walking home from school and noticing that an old lady dropped something prior to getting on a bus. He tried to call after her but the bus rode off. He came close to the object and it was a bag full of candy and small birthday gifts. The next day in school he became instantly popular sharing all the sweets and gifts with his classmates!

By the time he was going off to college Victor had amassed a modest fortune thanks to his incredible luck. He took courses in many fields such as engineering and computer science. He had had as a child a dream of understanding the nature of luck. He wanted to understand how it was possible that a single individual could be so lucky. So, he decided to create a device that would produce a completely random result that no computer or genius could predict, but only a single person (himself) could guess. He wanted to defy all the odds against the ultimate random number generator. It was hard work and after months of investigations, he decided he needed to take a break. So, off he went to Las Vegas to relax and regain his strength he claimed, but his real motive was ‘field research’.

His luck was contagious. Standing next to people playing slots would increase their luck. He would stand next to the bellboy at the hotel and guests would suddenly start to tip him huge amounts. He stood next to a street musician and then coins started to flood his empty hat.

On a particular day during his Las Vegas visit, Victor could feel his luck like a coat of electricity over his boy. So he went for the ultimate test: the Megabucks slot machine, a state-level progressive slot for the state of Nevada. He went for 10 spins with no results, but on his 11th bet something strange happened. The reels were spinning for 30 seconds without stopping, until one after another, the three Megabucks icons aligned themselves on the pay-line. And just like that Edmund Fluke was 11 million dollars richer!

He continued his studies but dedicated much of his free time to charity and humanitarian work. He donated regularly to various organization helping orphans, victims of earthquakes, hurricanes or droughts, and helped all types of needful people that he considered were struck down by unfavorable luck. He wanted to set a balance in the world and give back some of the blessing of good luck he had received to the world that needed it much more than him.

Only 3 years after winning the MegaBucks jackpot, Edmund had already a prototype of the machine that would generate completely random results. He would sit in front of the machine and try to foresee what combination of random numbers the machine will give out. To his amazement, he was beating the statistics and could guess the numbers at a rate no computer or other human could.

It was one evening on July 7th, 2007 (7.7.07) that he came up with a brilliant idea. He was going to built in his random number generator into the fairest slot machine in the world, a machine that could compute or sense the need of the player playing the machine. Then the machine will give payouts proportional to the need of the player. The machine’s payouts would be funded by Edmund’s large money reserves. He wanted to travel far and wide with this machine to help as many people as possible. So he needed a machine that would be mobile and easy to move from one place to another.

Edmund thought about how the slot machine would look like. He had always been a fan of astronauts and outer space exploration. So he decided to give it the shape of a space capsule, similar to those astronauts use return to the earth. He improved his random number generator so it could also measure data from its environment and calculate the ‘level of luck’ in the air. He also wanted the machine to be human-like so that it could interact with people, bring them joy and laughter while sharing its wealth with others.

After weeks of hard work, he finished the machine. It was a 3-reel slot machine that stood erect on two legs with wheels at the bottom, a big handle on the upper left side and a big smiley mouth that served also as a jackpot coin dispenser. Edmund was ecstatic when he tested it on campus and it was giving bigger jackpots to those that needed them the most. He had programmed with some basic language skills and they were amusing at first, but later became repetitive. Also, the battery would wind down pretty quickly and would require several hours to recharge.

So, Victor Fluke - the luckiest man on earth - was faced with a challenge. He wanted to take his slot machine on a world tour but needed to overcome the language and battery problems. He wondered: how could I make this slot machine come to life?

Thank you for reading the first chapter in the Life and Adventures of Mr. Sloto. This is an interactive story; this means that you can contribute to how the story will unfold. For the next chapter we will discover how Mr. Sloto comes to life. Is he struck by lightning and miraculously comes to life? Or someone puts a piece of radioactive material inside that triggers in him a spark of consciousness? Send us your suggestion to

If you use your suggestion for the next chapter, you will be rewarded with 200 FREE SPINS on your favorite game, plus we will showcase your name as co-creator of the next chapter of our story!

Sloto'Cash now has a Live Dealer lobby so you can play at real-life casino tables!

Our Live Dealer games allow you to play popular table games such as Baccarat, Roulette (American and European version), Blackjack and Casino Hold’em with a live dealer via a HD webcam stream. Using high-tech gambling tables, you can safely place and register your bets. The playing cards have bar codes so all bets are recorded digitally for a transparent and fair experience.

Find the Live Dealer button in the main Sloto'Cash lobby, at the bottom right.

You are able to chat with the dealer as you play. On the casino floor there are pit bosses that ensure customers are happy and satisfied, while making sure all wagers and payments are carried out properly. 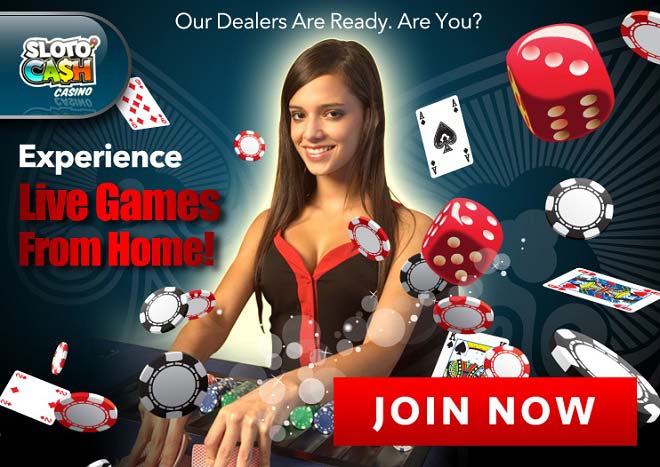