Fascinating Facts About Cleopatra’s Gold and Her Bonus Slots 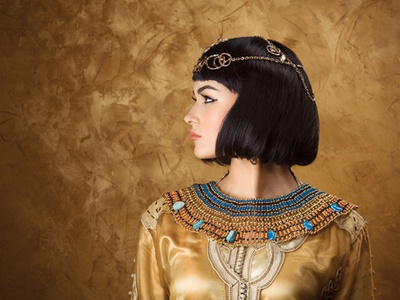 The empress Cleopatra was the last ruling monarch of the Ptolemaic Kingdom of Egypt. She was known for her beauty, wealth and love life. During her reign she captured the hearts of two of Rome’s most powerful men, first Julius Caesar and then Mark Anthony. Cleopatra is known for many things but she is most recognized for her ability to amass and grow her treasury’s vast store house of jewels and gold.

Learn more about Cleopatra, her reign, her lovers and her riches through historical accounts and via the fun-filled bonus slots Cleopatra’s Gold.

Cleopatra was not a scion of the ancient Egyptian pharaohs – rather she was a member of the Ptolemaic dynasty, the Macedonian royal family that ruled Egypt from 305 B.C. to 30 B.C. She styled herself as the living embodiment of the goddess Isis. After the death of her father she co-ruled with her brother, Ptolmey XIII, whom she married. She fled from her brother but raised an army in Syria and returned to fight for the throne. Julius Caesar came to Egypt to broker a peace between the two and Cleopatra and he became lovers.  Then it was Ptolmey’s turn to flee and Cleopatra was restored to the throne where she gave birth to her son, Ptolemy XV Caesar (known as Caesarion – “little Caesar).

Cleopatra married another brother, Ptolmey XIV and together with him and Caesarion, traveled to Rome where she found herself in 44 BCE when Caesar was murdered. She returned to Alexandria where she ruled with her son after her husband died. Caesar’s heir, Mark Anthony, sent for her and Cleopatra sailed up the Cydnus River to meet him, dressed in the robes of the new Isis. Anthony, as Cleopatra expected, was captivated and he returned with Cleopatra to Alexandria. The pair had twins together – Cleopatra Selene and Alexander Helios.

The pair’s domestic life continued to be threatened by Octavian, Caesar’s grand-nephew, who was vying with Mark Anthony for Rome’s throne.  Their domestic bliss was threatened by Octavian’s threats and, to re-establish peace, Anthony made a peace treaty with Octavian which included a marriage to Octavian’s sister, Octavia. Irregardless, Anthony reunited with Cleopatra and proclaimed Caesarion to be Caesar’s son. This relegated Octavian, who had been adopted by Caesar and recognized as his son and heir, to legal illegitimacy.

Anthony named Caesarion as the king of kings and Cleopatra was recognized as queen of kings. Anthony gave lands to his children, Alexander Helios and Cleopatra Selene. To Octavian, this meant that Anthony was challenging his rule and announced to the Romans that Anthony had given Roman possessions to a foreign ruler. He promoted the rumor that Anthony was planning to transfer the capital from Rome to Alexandra.

The Roman Senate declared war against Cleopatra and Mark Anthony. Anthony and Cleopatra committed suicide (separately) and were buried together in Rome.

Cleopatra was serious about the men in her life but she was even more serious about her treasury.  During her reign, Egypt’s economy was robust and that meant that she was able to amass a great fortune. She was one of the wealthiest monarch’s – man or woman – in her day and her storerooms of riches included gold, silver, precious stones and other types of jewelry.  Historians estimate her worth at close to $100 billion dollars in today’s terms – that’s big bucks.

In the Cleopatra’s Gold slot, you can spin the reels to create matching combinations for a chance to share some of that wealth. As you spin you can explore the life and loves of one of history’s most intriguing women. The game is available on PC and mobile with betting options that range from just 0.01 to 5.00 per line. That makes it a suitable game for budget gamers and VIP high rolling players alike.

The Cleopatra’s Gold slot machine has a traditional feel without a lot of bells and whistles.  There are 20 paylines plus wild multipliers and free spins.  Symbols include both low-paying hieroglyphic symbols that represent playing card values and higher payout symbols such as the Eye of Horus, pyramids, Egyptian jewels and Cleopatra herself.

Cleopatra is the game’s wild symbol. It substitutes for all other symbols on the reels (other than the pyramid symbol) to create winning combinations.  If your spin results in a Cleopatra symbol, she moves in to make the win, doubling the payout amount of any win that occurs with her involvement.

There’s a progressive jackpot in his game. It can be randomly triggered by any spin. To play the progressive jackpot game, which is a mini-game within the machine, you simply add an additional small deposit to your regular game bet and spin the reels as normally.  If your spin triggers the jackpot, you’ll collect the entire jackpot prize – tens, even hundreds of thousands of dollars.

Cleopatra’s life has inspired people around the world. Now you too can enjoy learning more about this captivating world leader in the Cleopatra’s Gold slot extravaganza.