The daughter of Saturn, the wife of Jupiter and the mother of Mars: we’re talking about the powerful Roman goddess Juno! Only Juno could be the inspiration behind the name of the month of June, a month Mr. Sloto wants you to spend alongside mythological wins!

Juno was known as the patron of all women and children, the Queen of heaven and the Supreme Goddess of the Roman Pantheon! And this June, this powerful goddess also represents greatness on the reels when you deposit $25 to play with up to a 225% Bonus + 50 Free Caesar’s Empire Spins!

Make June the mightiest of months while claiming mythical wins with help from the queen of god herself, Juno!

Offer available 2x per day throughout June. It holds 30x slots, keno or scratch cards playthrough and NO MAX CASHOUT! 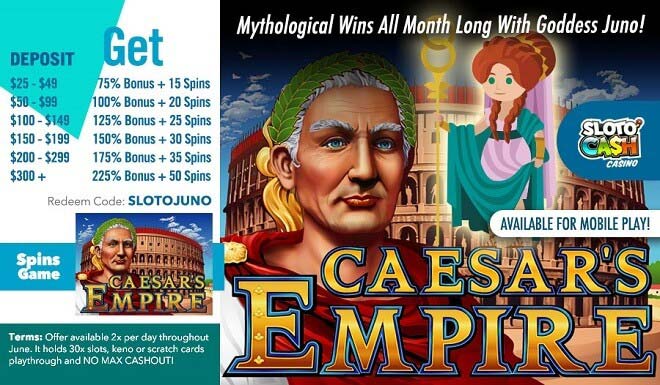