World’s Iconic National Dishes to go with our National Slots 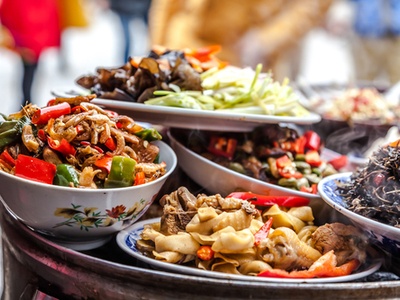 Even if you can’t indulge your curiosity about varying cultures through travel, there are other ways to learn about different countries and peoples.  SlotoCash online casino invites you to add to your knowledge about people around the world by exploring some of the most iconic dishes of the various countries.

Check out the dishes’ ingredients and histories to learn about more about what others regard as their national dishes.  Sloto Cash casino invites you to taste these dishes while you play cultural-themed online slots such as the Chinese-themed Fu Chi slot, the South American-themed Spirit of the Inca slot, the Greek-themed Achilles and many more.

The five reel, 50 payline Fu Chi Chinese-themed online slot takes you into the Chinese Year of the Dog where Fire Dogs, Earth Dogs, Water Dogs, Wood Dogs and Gold Dogs indicate your luck and fortune for the coming year. These dogs accompany you as you learn to interpret your birth sign to find out how you communicate, express your personality and demonstrate your abilities.

There are special numbers that are associated with good fortune during the Year of the dog (3, 4 and 9 along with combinations of those numbers such as 39 and 43) and special flowers including the Cymbidium, orchid and rose.

While you’re finding out more about the Chinese astrological cycle with the Fu Chi slot machine you can munch on some delectable lemon chicken potstickers that are easy to make and go with a wide range of side dish options.  Potstickers are a type of dumpling.

They are a traditional Chinese dish which are often eaten at Chinese New Year celebrations. They are filled with cabbage and vegetables or some kind of meat, folded into a pleated crescent shape and then steamed or pan-fried. The result is a pop-in-your-mouth treat that has a crispy exterior with a juicy interior.

To make these Chinese treats, place 1 lb of chicken in a large bowl with 1/8 tsp lemon peel (freshly grated), 3 chooped green onions and one pressed clove of garlic. Place the mixture in the middle of a gyoza wrapper and moisten the edges of the wrapper with water. Fold the wrapper in half, pressing the edges together to seal the chicken mixture inside. Fill all the gyoza wrappers.

Lightly fry the potstickers in 2 tbsps light soy sauce and one tbsp. sesame oil (about 2 minutes each side). Add  ½ cup water to the pan and cover the pan. Steam covered for 4 minutes and then uncovered for another 3 minutes (or until the water has evaporated).

Incan warriors, flowers, warriors, jewelry, amulets, vases and other symbols emerge on the Spirit of the Inca 2000 coin payout slot machine to give you a chance to vie for South American riches. The game’s theme revolves around the ancient Incan nation of South America which is known for bringing architectural marvels, stable government and technological advances of the day to the area that is known today as Peru.

As the reels spin you’ll watch the “Amaru”, the Incan king, bring glory to the Andes rain forests of the western coast of South America.

The Incan emperor was  believed to be a descendant of the sun and he was served his favorite foods on dishes of gold and silver. You don’t need such finery to enjoy your repast while you spin the reels of the Spirit of the Inca slot machine. One stable of the Incan diet was quinoa which is, today, known as a “super food” due to the high levels of fiber, manganese, phosphorus, copper, folate, iron, magnesium and zinc.

Quinoa was mixed with a large range of fruits, vegetables, fishes and meats by the Incas. One recipe that recreates a traditional Incan feast dish is a type of stuffing that is made by mixing cooked quinoa (rinse quinoa well, dry roast it in a pan until you hear popping sounds (let it pop for a few minutes) and then put it into boiling water to cook – 2 parts boiling water to 1 part dry quinoa.

Achilles Deluxe is one of the newest and most compelling of RealTime Gaming’s recent releases. It takes the player back to the time of the Trojan war when the ancients fought decades-long wars to determine supremacy. Achilles was originally released by RTG in 2012 but now gamers can enjoy the improved deluxe version which features extra elements, extra bonus rounds and extra fun.

Play Achilles Deluxe and join the famed Greek warrior as he takes on Troy one more time. There’s an army of features in this game including progressive jackpots, multipliers and 20 paylines for maximum win potential. There’s a 2000x max win which allows Achilles to go the length.

The goal of the game is to spin the matching combinations that will allow you to breach the walls of Troy and attain free spins where double and triple multipliers await. More surprises are in store with two separate progressive jackpot prize options.

This is a suitable game for high-stakes VIP gamers and budget players alike. You can enable as many or as few of the paylines as you like with bets ranging from $0.01 up to $5. The Major jackpot and the Minor jackpot can be awarded at any time during the regular game spins.

Achilles, Paris, Agamemnon and the famous Helen of Troy return to the gaming screen in this slot machine upgrade. The Trojan War, once believed to have been a legend but now proven to be a historical fact, is refought in ultra High Definition display along with a Wild game logo, a Shield Scatter symbol and plenty of Royal Card Suits from Ace on downward. All this is surrounded by a Greek Temple that sets the stage for the action to come.

As the symbols emerge on the reels you’ll determine whether you achieve high-payout symbols or low-payout symbols. The shield is both the Wild and the Scatter in this game – as the Wild it substitutes for other symbols to complete paylines while as the scatter it will trigger the Free Spins whenever three or more scatter symbols appear on a spin.

Once you enter the Free Spins you’ll be invited to choose one of three Trojan horses which then determines if you will receive 15, 20 or 30 free spins. All free spins wins payout with a triple multiplier.

If you achieve three scatters on a free spin the free spins round will reactivate and you’ll receive another round of spins where you can spin the reels for free and collect the resulting real money wins.

A second free spins feature is triggered by 3 or more Logo symbols. There’s a whole other round of free spins in the 2nd free spins game though free spins wins that result from this round give you only a double multiplier on your wins.

The random progressive jackpots can be won by any player who adds a jackpot bet to his regular game wager. It’s a game within a game so you don’t have to play……but for a small jackpot bet, you have the chance to achieve the multi-huge jackpot prize!

Helen of Troy was said to have been so beautiful that her face launched a thousand ships. You may not have lived to see Helen but now you can play the Achilles Deluxe and launch 2000 wins or more with spins, random jackpots, free spins rounds and more. Achilles has indeed returned and you’ll reap the rewards of his hard work when you play the Achilles Deluxe online slot.

The best thing about Souvlaki is that it’s so easy to make. In Greece, Souvlaki is generally made of pork or lamb but you can use another type of meat or fish as well (or tofu if you’re vegetarian).  Marinate the meat/fish/other kebab with olive oil, lemon juice, garlic, oregano pepper and salt. Put it on skewers, grill and pop into your mouth. Helen of Troy would be thrilled!