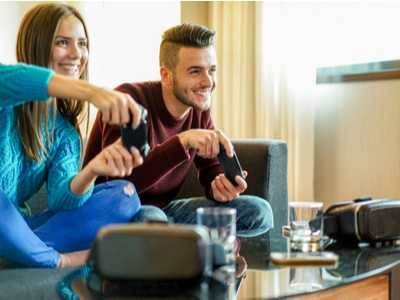 Now and then even the most ardent of gamblers need a bit of a break.  That means ditching the online casino for a few other equally exotic worlds where stealth, combat and role playing are the order of the day.

The downside of giving in to the temptation of video games over online casino games is there is no real money involved to keep you hot on the trail.  What you lose on the roundabout you win on the swings.  In the case of the top selling video games however it is all action at the expense of banking real money playing online slots at SlotoCash!

If you are determined to outwit the enemy, explore far off galaxies, and battle bosses with fierce intensity, here are 3 of the best video games in 2019:

In the latest game release from Obsidian Entertainment there is a heavy emphasis on freedom of expression. As a player you can choose your character, your companions and your weapons.  It is like a player-driven free for all in outer space where you gain experience points and level up to more intense and exciting gaming all round.

As you explore the appropriately named Halcyon colony you will encounter non-playing characters who have their own stories, missions and specialized skills.  You can recruit them and turn them into your BFFs tasked with watching your back.  Or you can ignore them and hope they don’t turn on you sometime down the line.

The Outer Worlds is an action-packed RPG that has all the ingredients for the good time – slightly barmy scientists, colonized and terraformed planets, factions conspiring to destroy the home colony and aliens that are always after your blood.

Game play is pretty standard in that you can customize your weapons of choice, choose from different ammo types and develop crucial technical skills required to take on the baddies and win.

What is a departure from the norm is in this game you can use your flaws – you know the things you are really not good at – to build your in-game character.

You can also use the Tactical Time Dilation State to your best advantage.  This nifty little feature effectively slows down time and gives you a sneak peek of your enemy’s health status and data - and that is a major tactical advantage if ever there was one!

If you are into corporatized sci-fi and need a hiatus from Sloto Cash Online Casino and its myriad online slots, table games and video poker variants, The Outer Worlds offers escapist entertainment with a fair bit of combat thrown in.

From fictionalized worlds located at the edge of the galaxy to a heavily romanticized historical era in Japan.  That is the setting of the critically acclaimed action-adventure Seikiro: Shadows Die Twice.

In this cinematic epic by From Software you will play the character of Wolf, a lethal Shinobi aka Ninja who is trained in the fine arts of deception, stealth attacks, swordsmanship and espionage.

The action takes place during the Sengoku Period that spanned more than 130 years.  In reality it was a time of social upheaval, military conflict and intrigue.  It was the Age of Warring States in Japanese history where the Emperor played a ceremonial role and the true power lay in the hands of the Shogun.

In the context of the game, the Sengoku Period is a mythical, magical time where Buddhist philosophy reigns supreme.

What is your core mission as Wolf?  To guard the Divine Heir, an immortal child who has Dragon’s Blood pumping through his veins.  What is your most effective weapon?  Your own immortality, which ensures you are able to revive and fight on… and fight you most certainly will.

Along with resurrection power your primary weapon is the razor-sharp Samurai sword or Katana.  You also have plenty of tools built-in to your prosthetic arm that you can use in defense and attack.

How do you defeat the legions of enemies – enemies that vary from massive serpents and corrupted monks to giant spiders and members of the wicked Samurai clan?  By using the Katana to unbalance your opponents until such time you are able to land the coup de grace!

If you are into a slash and stab single-shooter that is notorious for its difficulty this video game is tailor-made for you.  However, for a far more relaxed time in front of the screen, a time that offers its own special touch of magic, head directly to Sloto’Cash Online Casino – home to best online slots in cyberspace!

Set in 14th century France and featuring Amicia and Hugo de Rune – two terrified children of noble birth – A Plague Tale: Innocence is a horror survival story that will have you teetering on the edge of your chair.

You will play the indefatigable Amicia who has to look after herself and her five-year-old brother as they escape from twin nightmares – soldiers of the Inquisition and a never-ending stream of plague-infected rats.

Apart from your stealth, guile and wits the only weapon you have at your disposal is a sling that you can use to cause distractions, kill enemies with clean head shots, snap chains and stun soldiers.

You can also use fire and light to ward off the vermin and if you use the workbenches to full effect, you can upgrade your equipment and skills.

Play Online Casino Games Instead – There’s Money in the Equation

You can avoid the horror altogether by choosing to stay put and playing online casino games instead.  At Sloto-Cash Casino we have an extensive selection of online slots, classic table games, specialty games and a whole lot more.

You don’t need weapons or special skills to enjoy the best RTG gaming experience right here and right now. Simply sign up at our star rated online casino and let fly!  There could be lots of money coming your way in the immediate future!