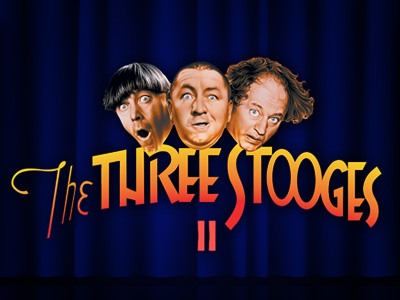 The popular and influential Three Stooges comedy act of the ‘30s, ‘40s, ‘50s and ‘60s continues to attract attention, controversy and admiration. Regardless of whether you remember them for their hair-brained antics, their twisted logic or their never-wavering loyalty to each other, you’ll enjoy the new Three Stooges II online slot, now available for free or for real money gaming entertainment at the Sloto Cash casino lobby.

Few people are aware that the seemingly-harmless antics of Larry, Curley and Moe of the Three Stooges were once deemed to be so dangerous to the Third Reich that Adolph Hitler put the Three Stooges actors on his death list. But these goofballs and their Marx Brothers-like relationship spanned themes from anti-fascist crusading to plain old foolishness and idiocy.

The Stooges became cultural icons. Many film historians say that they were the most famous comedy team in history. They produced in almost 200 feature films and shorts, starting in the early 1930s and concluding in the ‘70s. They made many stage and personal appearances and hosted their own TV show.

The Stooges started out as Brooklyn-born and raised Moses (Moe), Jerome (Curly) and Samuel (Shemp) Horwitz. Moe and Schemp went into Vaudeville in the ‘20s where they met up with Larry Fine (Larry). Ted Healy got them started as slapstick comedians and they stuck to that genre throughout their years on stage and screen. At that point they were Larry, Moe and Schemp. Schemp eventually left the act and Jerome filled the gap as Curly.

The Stooges began to solidify their personalities. Moe was the “brains” behind the Stooge’s activities and Curly was the dunce. Larry was the bridge between Curly’s clownish idiocies and Moe’s authoritarian bullying. Larry, in effect, completed the circle and the combination turned the act into a success. The Stooges were a Columbia act and they churned out film after film, making Columbia into a major player in Hollywood but accruing little of the largess for themselves.

Due to health problems of the original Curly, Schemp was brought back to replace Curly and in the late ‘50s, the group started producing TV shows. In the ‘60s they became popular, especially with children and were picked up by multiple networks around the United States. Feature films and live wraparound segments for a cartoon series helped the group through their later days and into the next decade when the reruns started.

One of the most interesting bits of trivia regarding the Three Stooges is that Michael Jackson, a big fan, modeled his moonwalk dance after the “Curly Shuffle” which Curly performed on multiple occasions. Some people even say that breakdancing was modeled on a Curly move in which he would fall to the ground and use his shoulder as a pivot while running in a circle.

Also, even though Three Stooges II slot has elements of an old-time classic slot the machine is mobile-optimized so you can play at any time and from any location on your PC or your handheld mobile device. The slot is compatible with both Android and iOS devices so regardless of the type of device that you are using, you’ll be able to open and play at your leisure.

Three Stooges II is a suitable game for bettors of any level. You have four coin levels from which to choose  ranging from 0.10 to 1.00. Minimum bets are 0.30 and maximum bets are $3.00 for all 3 lines.

The Three Stooges online slot is as fun-filled as the old-time classic hits. It doesn’t spin as fast as Curly’s head when Moe would conk him but it’s close!