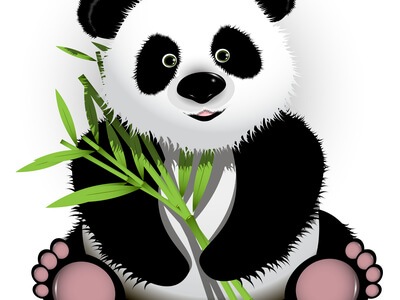 Is there anyone who doesn’t like to watch the pandas? Panda bears come from Central China and are considered protected animals. In China, people believe that it’s incumbent on humans to treat a panda as an honored guest.

Many people in China consider the sighting of a panda as a good luck sign. The good luck extends to the Panda Magic online slot which you can play at our SlotoCash online casino on your PC or mobile device.

A panda bear walked into a bar and ordered dinner.  After the panda finished eating, the waiter came up to him to give him his bill.  The panda looked at the bill, took out a gun and shot the waiter.  The owner of the restaurant ran up to him and said “what did you do?” The panda replied, “I’m a panda bear.  I’m allowed.  Look it up.”

The restaurant owner ran to the dictionary and looked up “panda bear.” And there, sure enough, was the definition of a panda.  “Panda Bear – eats shoots and leaves.”

That pretty much summarizes the life of a panda bear.  Ask most people about China and they’ll say that they know that pandas come from there but other than their voracious appetites for bamboo leaves and their almost non-existence fertility cycles, little is known about these creatures.  They are native to the thick bamboo forests of central China’s mountains but their shyness means that they rarely venture into areas where people can be found, making  their habitat a limited one.

Baby panda bears are pink but by the time they’re a year old they’ve developed the signature black and white (sometimes brown and white) fur for which they are known. They seem to be clumsy but in fact they are using enlarged wrist bones which function as opposable thumbs.

Pandas spend most of their day eating. They can eat up to 9 to 14 kg (20 to 30 lb) of bamboo shoots a day. Occasionally they eat other vegetation, fish or small animals but the bamboo accounts for 99% of their intake. They spend the majority of their day eating and must have at least 2 bamboo species available to survive. To eat, a panda holds the stem of the bamboo in his front paws which he uses to feed himself.

Pandas can swim and climb. Some male pandas will do a headstand against a tree to relax which is a lot of fun to watch! The panda’s color, black and white, is actually its camouflage that allows it to blend into the shady bamboo forests where it lives. Perhaps the thing that the panda is best known for is its black fur around its eyes. The panda’s eyes, unlike other bears’ round eyes, are slits. That’s what gives them good night vision and enables them to forage for food at night.

You can test out the panda’s reputation for bringing good fortune when you play the Panda Magic online slot machine at the SlotoCash online casino.

Panda Magic online slot is more than an animal-themed five-reel slot machine. The theme is cute and the features are sure to keep you on your toes with spins, multipliers, wild symbols, free spins, 1024 Ways to Win and a possible 2000x payout. Panda Magic is available as a PC (Instant or Download) or a mobile slot game which you can play for free or for real money prizes at your leisure.

The Panda Magic slot machine was designed to appeal to players who are looking for an aesthetically-pleasing gaming adventure. The production quality delivers high quality audio effects and animations to engage players’ senses on all levels. Front and center is the Panda wizard who welcomes you into the game’s fun house and accompanies you through the spins and other game adventures.

Game symbols include a reading owl, a spell book, potions, orbs, an Asian-styled home and the Panda-wizard himself. The Wild is the game logo which can substitute for any other symbol to complete paylines and deliver wins. There’s a fixed wild which appears in the regular game and a randomly triggered feature where the panda adds up to 3 wilds to a reel in the free spins game. Sometimes those wilds are expanding wilds in which case they expand to cover the entire reel to help you achieve more cash rewards.

The scatter symbol is the ticket which pays out for a scatter combination whenever 3 scatters appear on the reels in any position. Three or more scatters will also trigger the free spins round – if you have 3 scatters on a spin you get 20 free spins while 4 scatters earns you 25 free spins and 5 scatters is worth 30 free spins.

The Panda Magic slot is a 1024 Ways to Win slot machine. That means that, unlike other slot machines where you must enable individual pay lines, in a Ways to Win game you simply place a global bet on the spin. So regardless of where and how the symbols line up, if you achieve three matching symbols that appear one next to the other, you win the spin and the resulting payout.

Panda Magic brings the wonder of one of the earth’s most remarkable species to the gaming screen for fun, excitement and real money prizes.