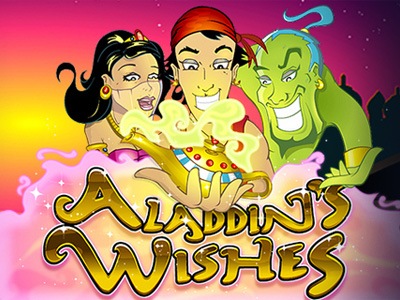 The classic stories of the poor boy Aladdin who goes from rags to wishes have enthralled both young and older readers for centuries. Now you can explore the tales and actually join with Aladdin to help him amass wealth and good fortune in the Aladdin’s Wishes online slot.  You can experience all the magic and intrigue of Aladdin and his genie when you play our online casino real money slots here at SlotoCash.

There are many stories in the One Thousand and One Nights story collection but the saga of Aladdin is probably the most famous. The story has a bit of everything – a young, good looking hero, a maiden in distress, magic, an evil villain and the promise of riches.

Legend says that the saga was related by one of the king’s concubines, Scheherazade, who invented the multi-part story to keep the king from killing her. The king was enthralled with each night’s narrative and kept Scheherazade alive so that he could hear each night’s episode. The story of Aladdin, along with the stories of the Seven Voyages of Sinbad the Sailor and Ali Baba and the Forty Thieves, kept Scheherazade’s king captivated night after night.

Over the years, the story of Aladdin has gone through many changes. Whereas originally, Aladdin was a bit of a lazy bum who lived with his mother, he has, over the years, morphed into a charming street urchin who lives by his wits. And the original story even had TWO genies – one was the genial Genie of the Lamp but there was, indeed, a second who comes with a magic ring that an evil magician gives to Aladdin.

Today, most people are familiar with the Disney version of the story which was released in 1994. That has become the much-loved story in which Aladdin overcomes the odds to become friends with his genie friend, win over princess Jasmine and her protective king-father and become a wealthy member of the king’s family. Now you can delve deeper into the story of Aladdin and his genie with the interactive Aladdin’s Wishes online slot.

The second protagonist in the Aladdin story is the Genie who facilitates the good things that start happening in Aladdin’s life. Genies, known as “jinn” in the Arabic world are supernatural beings. In modern culture genies have a reputation as being wise, benevolent and eager-to-please servants who can be summoned by rubbing on a lamp in which the genie lives until being summoned.

In actuality, genies come from ancient Mesopotamian legends where they were regarded as supernatural beings who appear as humans but possess strong powers that they often use for evil purposes. Genies are believed to be able to fly through the air, become invisible and change their shapes and are even referenced in the Muslim holy book, the Koran. Some genies have human appearances and even marry, work and raise families but other “jinn” are mischievous and vindictive. According to legend, the jinn have supernatural powers and can make life difficult for anyone who crosses them.

There are also good genies who appear throughout literature and in popular media. One of the most popular TV shows of the ‘60s featured a sexy, female genie who tried to stay out of trouble but never quite succeeded.  She eventually ended up marrying her master and the rest, as they say, involved a happily ever after story.

Children’s books abound with genial genies in stories such as The Genie with the Light Blue Hair, As You Wish, The Art of Wishing and The Secrets of Droon: The Genie King. There are also genie books for adults such as Jinn and The Amulet of Samarkland.

If you’re enchanted by jinns and genies, you can also sign into the online casino and play the Aladdan’s Wishes online slot for free or for real money prizes.

When you play Aladdin’s Wishes online slot at the online casino you’ll get more than good luck. As soon as you line up the symbols and make your wish you can look forward to a fun-filled and interactive slot adventure that gives you multiple opportunities to fill up your bank account with payout prizes.

Aladdin comes to life on the reels along with the princess, the Magic Lamp, the Magic Carpet, the monkey and, of course, the genie. You’ll see other Arabian Night-themed symbols including jewels, vases, palaces and swords.

In addition to the opportunities that you have to achieve payouts when you line up these symbols you can also play the extra Aladdin’s Wishes progressive jackpot and try to spin the spin that delivers the additional jackpot prize. In this game, you don’t need to play at maximum bet level to trigger the jackpot – any bet at any level can activate the jackpot.

As you spin and complete paylines, you’ll see the genie standing by, watching your action. The Aladdin symbol is the game wild. Aladdin substitutes for all other symbols (except the Magic Lamp) to line up completed paylines for payout wins. Whenever a payline is completed with the help of the wild, the payout doubles. If the Aladdin wild emerges on the second, third or fourth reels, Arabian music will accompany Aladdin’s appearance on the screen.

Aladdin’s Wishes features a bonus feature which is triggered whenever 3 or more Magic Lamps appear, in any position, anywhere on the reels. You’ll see five lamps and you’re given the chance to select your preferred Magic Lamp. Each magic lamp reveals a different number of free spins so once you pick your magic lamp you’ll see how many free spins you can spin. Maximum number of free spins awarded is 25 and all free spins pay out real money prizes on the wins.

Free spins wins come with multipliers that are valued at between 2X and 100X the triggering bet. If 3 or more Magic Lamps emerge anywhere on the reels on a free spin, the free spins round retriggers.

Hook up with Aladdin and explore genie magic and generosity with the Aladdin’s Wishes online slot.