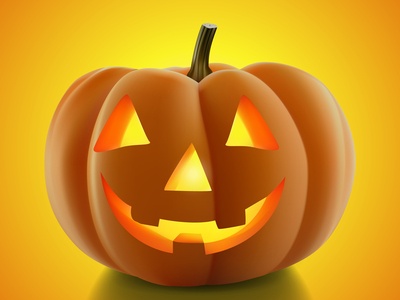 For some, Halloween is a time to frighten and be frightened. People play spooky pranks on their friends, dress up in scary costumes and tell stories about eerie happenings. For others, Halloween is simply a fun time to enjoy the company of good friends, have some delicious snacks and join in some spirited fun and excitement.

Halloween has its origins with the ancient Celtic pagan festival of Samhain when Druids would put on costumes and light bonfires to ward off ghosts. The Celts celebrated their New Year on November 1st . Before the celebrations could begin they paid tribute to the dead who, according to Celtic belief, visited earth before New Years when, they believed, the boundaries that separated the worlds of the living and the dead were blurred. Samhain evolved as a way to prevent the dead from returning to earth and wreaking havoc.

The Druids extinguished the fires in their homes and built huge sacred communal bonfires.  People then gathered to sacrifice animals and crops to the Celtic deities and during the festivities they wore costumes and told fortunes. After the evening celebration the people re-lit their homes’ fires from the central sacred bonfire, knowing that those were the fires that would take them through the coming dark, cold winter.

When the Roman Empire conquered the Celts they incorporated two of their own festivals with Samhain. One was Feralia when the Romans would commemorate the dead and the second was Pomona, a tribute to the Roman goddess of trees and fruit. When the Roman Catholic Church declared All Saints Day on November 1st and All Souls Day on November 2nd, they blended the new celebrations with Samhain in an attempt to replace the Celtic pagan festival with a related, church-sanctioned holiday. The celebrations were similar -- big bonfires, parades and costumes – especially those relating to angels and devils.

The All Saints’ Day celebration came to be known as All-hallows and the night before – the traditional night of Samhain – was called All-Hallows Eve which eventually morphed into “Halloween.”

Over the years, the celebration of Halloween spread. In the 17th and 18th centuries it was basically a night of “play parties,” in which neighbors would gather to mark the end of the harvest season by sharing stories of the dead. Dancing and singing was a feature of such gatherings. Some people told ghost stories on Halloween night and mischief-making of all kinds became a popular way for kids to let off steam. By the mid-19th century, more people learned about Halloween and its popularity spread.

One new custom involved dressing up in costumes and going house to house to “trick-or-treat.” Much of that is derived from the Celts who would wear masks when leaving their homes during the Samhain celebrations to confuse dark spirits who were hovering nearby and would distribute cakes to the poor in return for the promise of additional prayers on behalf of the departed.

Trick-or-treating started to gain popularity in the 1920s when children would go door to door, asking homeowners for treats. If they were denied, they might come back and play a trick – winding toilet paper through the trees or painting some graffiti on the sidewalk by the house.

Slowly, Halloween became a time for neighborhood get-togethers with parties that featured food and costumes. Parties for adults generally featured something a bit stronger too…..This was the time that Halloween lost most of its superstitious and religious overtone.

By the ‘70s, Hollywood was getting in on the act with Halloween-themed movies. The Halloween franchise started in 1978 and went on to produce 10 sequels as well as a entire genre of “slasher films” such as Friday the 13th, Nightmare on Elm Street and Scream. The latest Halloween franchise film was released as recently as 2018. Additional, light-hearted Halloween films have included It’s the Great Pumpkin, Charlie Brown, Beetlejuice, Hocus Pocus and The Nightmare Before Christmas.

A more recent form of Halloween excitement evolved when themed slot machines became available to more people via online connectivity. Many slots enthusiasts found that the online casino featured Halloween-themed slot machines in their games lobbies so they could play at their leisure for free or for real money prizes. One of the most popular of those slot machines, Halloween Treasures, is now available for PC and mobile play at SlotoCash.

Halloween Treasures’ reels are illuminated orange with all of the most beloved icons of Halloween. There are witches hats, bottles of potions, masks, candles, pumpkins, gravestones, crystal balls and more. There are both regular and golden symbols so, depending on the number of coins bet you can make completed paylines with either of these symbol types. The golden symbols, of course, pay much more!

The game includes three special symbols, the Crypt Door, the Graveston, and the Crystal Orb.

The Crypt Door is the game Wild. It emerges on reels 2, 3 and 4 and substitutes for any other symbol to create a completed payline.

The Gravestone Wild comes out on the third reel and brings a multiplier to the wins that are made with its inclusion.

The multiplier increases as your bet increases – place a low bet and your multiplier stays low. But if you make a big bet you can get a multiplier of up to 5x on wins that include the Gravestone wild symbol.

The scatter also triggers the Free Spins game whenever three or more scatters appear on a regular game spin.  Low value Royals are removed and you can spin twelve times for free and collect the resulting winning payouts from those spins.

The best feature of Halloween Treasures slot is the 243 Ways to Win Feature. 243 Ways to Win ensures that you have 243 possible winning combinations for every spin. You don’t enable specific paylines in a 243 Ways to Win Game. You place your bet on the spin and then watch to see – not IF you win, but HOW MUCH you win!

Spend your Halloween with some exciting entertainment fun and excitement with the Halloween Treasures online slot, available at Realtime Gaming casinos.