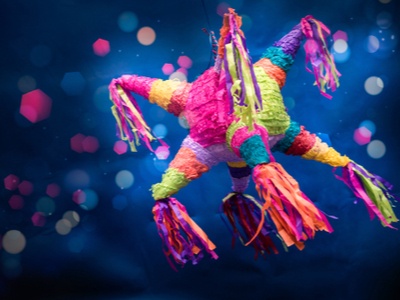 Today, most people see piñatas as a game played at parties where attendees are Mexican or where the party has a Mexican theme. In reality, piñatas have a deep cultural history in Mexico dating back to Aztec and Mayan civilizations. With the holiday season nearing and piñata parties being planned around the world, now is a good time for SlotoCash online casino gamers to explore piñata history and jackpots.

A piñata is a clay pot decorated with ribbons and colored paper. Many piñatas are shaped as animals or other fun-filled characters. The piñatas generally have treats inside. Today, many celebrations feature piñatas, both parties in Mexico and those held among people of Mexican descent or with celebrants who want to include Mexican culture in their celebration.

Some researchers believe that  piñatas are Chinese in origin  -- the Chinese would celebrate their Chinese New Year with a piñata in the shape of an ox or a cow. They decorated the piñata with colors and symbols that would entice the gods to grant celebrants a favorite climate for the coming year’s crops.

The piñata would be filled with different types of seeds. Celebrants would hit the piñata and when it broke, the seeds would spill out. The remains of the piñata would be burned and everyone would go home with some of the ashes which, according to Chinese belief, would grant good luck.

As with many Chinese customs, the piñata tradition migrated to Europe in the 14th century. Christians began to associate it with Lent and in Spain Piñata Sunday was celebrated on the first Sunday of Lent with the Dance of the Piñata with the  piñata  being made using a plain clay container that was decorated with ribbons, colored paper and tinsel.

When the Spanish captured Mexico and began to settle the country the piñata tradition was brought over to the country where a similar Mayan tradition was already familiar to the local residents. Mayan celebrations added the element of blindfolding the person who was to hit the piñata to break it open.

The Aztecs  also celebrated the birthday of the deit Huitzilopochli in which priests decorated a clay pot with feathers of many different colors. After breaking the pot with a stick or a club, the treasures that had been placed inside be offered to the idol. When Augustinian monks came to preach Christianity in the region they adapted European piñatas to the local culture.

The Christians began to teach that the piñata represented man’s struggle against temptation. Sometimes the piñata would be shaped like a donkey to stand for the burro that Mary rode as she carried Jesus but when it was shaped as a pot, it would represent evil.

Some people turn the person around 30 times to represent the 30 years of Jesus’s life.  Beating the piñata represents the struggle of the faithful against temptation and evil. Once the piñata has been broken, the treats that fall out represent faith’s rewards.

The  piñata game is played by hanging the piñata from the ceiling. Participants  stand in a single file line. Each participant is blindfolded in turn, spun around and given a wooden stick with which they try to hit the  piñata. The participant whose whack breaks the piñata open wins.

You can mold a piñata and play the game with your friends or you can open your PC or mobile device and play Jackpot Piñatas and collect real money prizes when you complete combinations on the reels.

Jackpot Pinatas is a 5-reel, 20 line online slot that brings the fun and excitement of Mexican piñatas to your PC or mobile screen. Jackpot Pinatas is for players who want to jump in to their wagers – each spin requires a $5 deposit with no options to bet only on specific lines or reduce the coin value.

Game symbols include sombreros, rings, tocos, firecrackers, maracas, bulls, dogs and cute piñata  donkeys. The green donkey is the wild symbol. It can substitute for other symbol to complete a payline and trigger a prize.

The dog piñata is the game’s scatter. Three dog piñatas, falling in any positions on the reels, activate the Jackpot Pinata’s Bonus Feature.  When you trigger the Bonus Game a second screen will open where you’ll see a variety of animal piñatas. When you click on the piñata of your choice where you’ll find your prize hidden.  Payout is set to up to 20 times the bet that you wagered on the spin that triggered the bonus round. If you find The Rose symbol hidden under one of the piñatas, you’ll collect the piñata’s grand prize.

The game also features a Free Spins Bonus round where you are awarded up to 25 free spins with all wins paying out a double payout.

You don’t have to wait for the next Mexican-themed party……click into the Jackpot Piñatas online slot and have a fun-filled piñata party of your own!