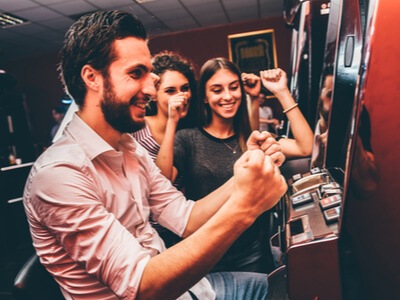 Today slot machines are secure and well protected but that wasn’t always the case. Over the years, tricksters have used some innovative strategies to cheat the slot machines.

Today’s technology makes it impossible to win at slots fraudulently. The machines are designed to be impenetrable. That wasn’t always the case. When slot machines were first introduced they were vulnerable to attack. In the early days when the “one-armed bandits” paid out candy and drinks, cheating wasn’t worth the effort but as time went on and the slots started to pay out real cash payouts, they became targets of those who believed that by taking advantage of the machine technology’s weaknesses they could manipulate the winning payouts.

SlotoCash casino invites you on a journey of fascinating history where you can find out about some of history’s most unique and innovative slot machine swindles and scams.

One method used to trick the machine involved picking the lock. Those locks on the early machines were poorly made and, thus, easily picked. Once the scammer was able to access  the internal mechanism s/he would file gears or add weights that would influence the outcome in a way that the cheater could predict.

In the early days of slot machines, it wasn’t hard to find a flaw that could be exploited. The most common of these tricks was to pop the arm of a machine after a winning reel appeared to double the winning payout.

This was done when drawing the arm downward to cock the gear and start the reels spinning. The outcome was randomized when the tension was released so, before the tension was released, the fraudster would slap the arm to kick it past the gear and lock the reels into their previous position.  As the arm would return to its starting position another win would be registered and a second payout would be delivered.

The mechanical machines became more secure over the years as designers addressed the mechanical flaws but fraudsters continued to be resourceful and find clever ways to beat the machines.

The machines that were installed in Vegas casinos in the 1940s had a light bulb that operated as a light sensor. It was designed to control the number of coins that were paid out after a win. A thin piece of plastic held the bulb that was shaped in such a way that it would slide into the hopper in order to alert the sensor that was monitoring the light and register the number of coins that passed into the payout tray.

Whenever a coin would pass over the light sensor, the light would be blocked for a split second as coins were drawn from the machine and expelled into the payout drawer. Once the required number of coins was paid out, the sensor would go into “off” mode.

In order to allay suspicions, the scammers would use the light sparingly to ensure that the machine would eject only a few extra coins on each play. Eventually however, the fraud was detected and the slot machines were redesigned to include a hinged plastic guard that would come up from below to cover the sensor. By blocking the sensor, they reasoned, the machine would be immune to the bulb’s override and scammers wouldn’t be able to trigger the release of extra coins.

The cheats, however, bypassed the hinged plastic guide with a “Monkey Paw.”

Much to the dismay of the machine designers, the introduction of the hinged guard actually made it easier for the cheaters to manipulate additional payouts. Tommy Glen Carmichael created a “Monkey Paw” that simply eliminated the need for the light to be soldered onto the thin plastic.

The Paw was a piece of thick, stiff guitar string. It was bent in a manner that molded it to the internal shape of the machine and it was connected a metal wand that was powered by a battery. By sliding the “paw” up the air vent of the new hinged plastic guard, it would push up the guard that had been placed in the machine to block the sensor and trip a microswitch.

In this way, each coin would last longer, according to the amount of time that the light was blocked. In effect, it looked like only one coin had been expelled from the machine while in actuality, several coins could pass once the light was broken.

The Monkey Paw was improved upon by a Light Wand that tripped an electronic sensor instead of tripping an actual switch.

Ronald Dale Harris, who worked with the Nevada Gaming Commission as an engineer, used his access to machine source codes to modify slot machines so that, when a specific number of coins and code sequence were inserted, the machine would deliver a large winning payout.

As mechanical payout devices were relegated to recycle bin, bill readers and payout slips became the norm. Yet even here, cheaters found ways to exploit the technology.

One method involved placing a thin, flat projecting wire onto a pocket garage door opener. It would be slipped under a bill as it was entered into the bill reader. Whenever the button was pressed it would signal the bill-reader to register it as a 100-dollar bill. In this way, the scammer would insert a $1 bill and press the button continuously, causing the machine to register the payment as $900. The scammers didn’t want to go beyond $900 because any amount over $900 would alert the casino security.

After  the machine would be “prepared” a second partner would come and start playing on the machine to score the massive prizes being paid out. The device worked for quite a while because the cheaters used the system sparingly over different locations. But by moving around, they could collect big payouts.

That’s what a group of Russian thieves did when they studied slot machines in an attempt to find their vulnerabilities and flaws.

They discovered that by holding a smartphone close to the screen while playing, resting and then returning to the machine, they could record spins, upload the video to remote partners who would analyze the footage and determine the play pattern and then send pack timing markers to the player who would use his phone to determine when to press the Spin button.

All this took place in 2014, providing further proof to all involved that technology is no insurance against scammers.