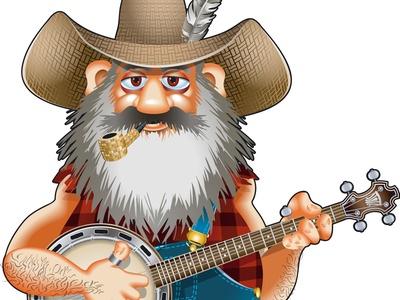 People generally think of hillbillies as poor mountain dwellers who eek out their livings in low-income, menial job. The image that people have of hillbillies is that of low-educated, clannish and suspicious of outsiders.

There’s a new generation of hillbillies that is ready to take on the world. In their own sly way they are adept at finding and holding onto the riches of the hills. They continue to live in their ancestral homes, maintain their customs and keep to their unique ways. Yet you never know what kind of wealth is hidden under the floorboards of the houses of these wily hill folk.

Learn about the hillbillies of the Ozarks and Southern Appalachia and then join them for a hootin’ and hollarin’ good time in the Hillbillies Sloto Cash casino lobby online slot.

People who live in rural areas of southern Appalachia and the Ozarks are often called “hillbillies.” Hillbillies were described, in a 1900 New York Journal article, as “a free and untrammeled white citizen…..who lives in the hills, has no means to speak of, dresses as he can, talks as he pleases, drinks whiskey when he gets it, and fires off his revolver as the fancy takes him".

There are many stereotypes of hillbillies but one that sums up how the residents of these areas think of themselves is that they are self-reliant, independent individuals who cling to their ancestral traditions and customs. Some of these people also accept the characterization that they can be violent – many own firearms and are prepared to use them at a moment’s notice.

Today’s hillbillies are recognized as descendants of Irish, Scottish and English settlers. They tended to isolate from the larger society – some etymologists posit that the name derived from “hill” and “billy” – a Scottish word that meant “companion” or “comrade.” Historians, on the other hand, say that the early hillbillies were followers of King William of Orange and “billy” refers to the dimunitive form of William. In Ireland in the 17th century, Protestants who supported King William (King Billy) were known as “Billy Boys.”

Early Ozark and Appalachian mountain settlers saw their region fall behind the rest of America after the American Civil War when cities and other areas started to become industrialized. The mountain regions fell behind economically and the hill people themselves started to be perceived – and perceived themselves – as isolated. Many welcomed this isolation and in the early years of the 20th century, the hillbilly stereotype became acknowledged.

Previously isolated communities began to integrate into mainstream America after WWII but many people stayed in their family homes and as the image of rough mountaineers became entrenched in American media and folklore, the "hillbilly" stereotype was solidified.

Hillbillies are often featured in popular culture, often in comics (Snuffy Smith and Li’l Abner), Films (Ma and Pa Kettle, Hee Haw and Sergeant York) and TV shows (The Simple Life, Andy Griffith, The Beverly Hillbillies and The Real McCoys). Many of these depictions were of simple-minded, crafty, good-hearted but wily folk but the mis-characterizations continued, much to the dismay of rural residents of the mountains.

One stereotype which continues to draw attention is that of the sly hillbilly who outwardly, seems to be poor and simple but in reality, has money stowed away in every nook and corner.

Now you can play the Hillbillies online slots and see for yourself what kind of riches are hidden away in them-thar hills.

The traditional home of the mountain folk – also known as hillbillies – is also home to “Black Gold” and “Texas Tea” – oil! More than one previously-poverty-stricken hillbilly has found himself with sudden riches thanks to lodes of oil that were discovered on his land. You don’t have to head up to the hills to get a share of some of that cash.

Just sign into our SlotoCash online casino and play Real Time Gaming’s Hillbillies online slot on your PC or mobile device. As you spot the payout symbols – shack, moonshine, bloodhound and hogs – you’ll spin the reels to line those symbols up. Based on the symbols that line up into matching combinations, you can take your share of what the mountains have to offer.

The game is based on the 1960s favorite Beverly Hillbillies and features Grandma, Jed, Jethro and Elly-May.  When Jed emerges on the first reel, Elly-May displays on the third reel or Jethro appears on the fifth reel they  substitute for other symbols and then complete the winning lines. Their appearances also multiply your prize – double for Jed, double for Elly-May and 5x for Jethro. If one or more of them is part of a winning line they even multiply together.

Hillbillies slot features a Random Progressive Jackpot which can trigger after any regular game spin. Wins for this progressive jackpot prize can be hundreds, thousands or tens of thousands of dollars so it’s worth your while to make a jackpot deposit and play for the jackpot prize.

The Hillbillies slot machine is a great game for low-budget players and high-stakes bettors alike. You can play as many or as few of the 20 lines  and enable them anew before each spin. Remember though – only those wins that occur on enabled paylines will pay out so it’s a good strategy to enable all of the lines (or as many as you can), even at a lower amount. Line bets range from 0.01 coins to 5.0 coins.