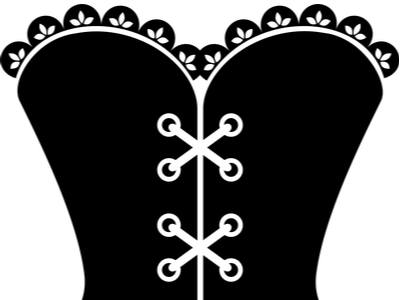 If you think that there have been some strange fashion trends recently, consider some of the more unusual fashion vogues in years gone by. Some fashions are created because of social or cultural influences while others are simply…..weird. Throughout history, the instabilities of fashion trends sometimes seemed like a random game much like our online slots real money wins. Some focused on making person look more appealing but in other instances they were used to socially identify and control the individual wearing the clothes.

We don’t always know why certain clothing norms emerged – whether it was simply a quirk of someone’s imagination or whether there were deeper reasons behind the style. Regardless, check out what our ancestors wore and say “thank you” that you live in a calmer fashion environment.

Bliauts were dresses that were worn by upper class ladies in Western Europe in the 11th to 13th centuries. The dresses featured flowing skirts under horizontal pleating or puckering which was sewn to a snugly fitted under bust. The main attraction of the bliaut were  its long sleeves that could reach the floor. This fashion evolved because wealthy women wanted to demonstrate that they didn’t need to work. Wearing a bliaut made it clear that the wearer wasn’t performing any mundane, domestic tasks and was only expected to sit quietly and do embroidery or crocheting -- activities that didn’t require much arm movement.

Sugar wasn’t available in England until Elizabeth I became regent. When sugar began to be imported into England, Elizabeth quickly developed a sweet tooth and her teeth became black as they decayed. Many women in England’s high society wanted to imitate their Queen and they started to purposefully blacken their teeth. Black teeth became a status symbol because it indicated that the person’s family had money to buy sugar.

As the name indicates, hobble skirts hobbled the wearer’s ability to walk comfortably while wearing them. The fashion was purposefully introduced to hobble women – to prevent them from taking large steps. Hobble skirts originated in France. The skirt fit snuggly over the woman’s backside and then hugged her legs tightly, ending with a narrow enough hem that would impede her stride. The skirt was in fashion in the United States and in Europe  between 1908 and 1914.

Bombasting gained popularity during the Elizabethian era (16th century) when high society English women padded their sleeves to make the sleeves seem larger and give the impression of more meaty (hence, well-fed) arms. Men bombasted their doublets to create the illusion of a more-filled out belly which was meant to be a symbol of prosperity.

Another example of bombasting were codpieces which were attempts by men to puff out their pants in the region of their private parts. Some codpieces were made out of carved wood but most were pieces of material.

Powered wigs gained popularity in the Baroque period when upper class men would don the wigs to give themselves an aura of importance. They originated due to the prevalence of syphilis among England’s royalty and high society.

Many men afflicted with syphilis exuded a strong body odor so in order to cover the smell, they wore horse, goat or human hair wigs. The wigs were powdered in scents like orange and lavender to cover the syphilis smell. Once Louis XIV started wearing the powdered wigs (not only did he have syphilis but he was going prematurely bald and wanted to cover up), the trend caught on.

The fashion spread quickly and by the late 17th century, men in different European countries were wearing the wigs. White became the preferred powder color. When the British government started taxing hair powder in 1795, the fashion began to wane. A remnant of the powdered wig fashion continues today in British courts where judges and many attorneys wear powdered wigs.

Women wore corsets in the 19th and early 20th centuries to show a trim figure but, much to the surprise of many, men wore corsets too. In the case of men, the reason for wearing a corset wasn’t vanity but rather as a therapy for back pain, to promote proper upper body posture while on horseback, to prevent bruising of soldiers’ kidneys as they were riding their horses, to protect the man’s spine in case he were to be thrown off his horse and to help soldiers fit into their uniforms.

Corsets for men fell out of mainstream fashion in the 20th century but they were adopted by the ‘subculture’ and revived by Dior for the “New Look” fashion in the 50s.

Footbinding was practiced in China from the 10th century until the communists took over in the 20th century. The custom started with upper class women who would have their feet bound as young girls so that they would not grow more than 4 inches.

The practice involved forcibly breaking the arches of the feet which were then bound and re-bound to prevent them from healing properly. One of the first acts of the Communist government in China was to outlaw foot binding.

The chopines shoe attachment became popular with Venetians in the 16th and 17th centuries who were looking for a solution to their muddy streets. The shoes featured high, high, high thin heels that, the theory went, would help a woman keep her feet clean as she walked through the mud.

The shoes became fashionable and were worn by women who wanted to be tall to indicate that they were important and wealthy. The taller the chopines, the higher the wearer’s status. Chopines could be as high as 20cm – sometimes the wearer would need the help of an attendant to maintain her balance.

A temperance activist named Elizabeth Smith Miller was the first one to wear a bloomer suit in 1851. The suit consisted of a short dress/vest and loose trousers gathered at the ankles. It outraged many members of the public who saw it as a woman’s attempt to wear men’s clothing. Women who it were frequently harassed on the streets and the trend quickly died out.

Macaroni fashion refers to French men of the 1700s who adopted elements of Italian style. The most notable element of macaroni fashion involved wearing a huge wig with a tiny feather (or hat) on top. It also involved bright stockings, fancy buckled shoes and flashy waistcoats. Macaroni men also made up their own language which combined Italian, French and English.

The American song Yankee Doodle (…..stuck a feather in his cap and called it macaroni) referred to macaroni fashion.

Crinolines, also known as “hoop skirts” were hoops made out of steel, wood or horsehair and worn under regular skirts by 19th century women. The goal of the hoop was to push the skirt out. The hoop skirts could be dangerous – there are accounts of women who were blown off cliffs or caught up in a gust of wind. The skirts could catch in carriage wheel spokes while other wearers were sometimes unable to escape from dangerous situations because of the width and stiffness of their skirts.

There are some strange fashion trends in the 21st century but nothing really compares to some of history’s most bizarre styles.