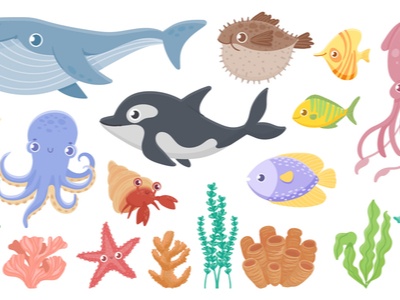 When you look out over the calm sea waters you might find it hard to believe that under the surface, a whole ecosystem is teaming with life. Read some amazing stories about real-life creatures and then dive right into RealTime Gaming’s ocean-themed Crystal Waters, available at the Sloto Cash casino lobby.

Some true stories about underwater friends:

Dean Bernal is best friends with JoJo the dolphin.  In 1981, JoJo started to follow Dean on his daily swims in the Caicos and Turks Islands. The two explored isolated bays, coral reefs and caves. JoJo once protected Dean from a hammerhead shark and Dean spent years on a campaign against those who wanted to capture JoJo and exploit him.  Their story was made into a book by Dean, Dean and JoJo; The Dolphin Legacy.

Ibis was a humpback whale who was popular with residents and visitors in the Cape Cod and Maine regions in the ‘70s and ’80. Scientists tracked Ibis along her migratory routes from the New England area to the Bahamas and back again.

In 1984 Ibis was spotted entangled in a huge fishing net. Rescuers couldn’t reach her but they watched in horror as, for 2 months, the whale struggled to free herself from the net. For several weeks Ibis was out of view and it was assumed that she had drowned but suddenly the rescuers saw another humpback to seemed as though he was trying to help her.

By watching the male, rescuers were able to finally locate Ibis and devise a rescue plan that involved tying floats to the tangled netting which would prevent her from going underwater. With that, they cut the net and Ibis was freed.

Thanks to the experience with Ibis the MAER Marine Animal Entanglement Response team was formed. To date the team has saved over 200 other whales who have been entrapped in a similar manner.

Winter is a bottlenose dolphin who was caught in a crab trap in 2005 which caused her to lose use of her tail. Rescuers took her to the Clearwater Marine Aquarium where she still lives.

Due to the loss of her tail, Winter was fitted with a silicone and plastic tale to help her swim normally. Many children and adults see her as an inspiration to show what those with disabilities are capable of doing and how they can adapt. Winter was the subject of the book Dolphin Tale.

Regardless of whether you’re a deep sea enthusiast or you simply enjoy soaking up the ambiance of the ocean environment you’ll enjoy Crystal Waters slot machine which is now available for real money gaming at the online casino.

Crystal Waters slot machine brings the ocean ecosystem to life with ocean creatures who swim around the yachts that sail lazily around the sea. The game has 20 paylines and you can enable as many of the paylines as you want – but remember, only those paylines that are activated by a bet will pay out on a winning combination. You don’t have to choose one of the high-limit 100 coin betting options if you don’t want to since Crystal Waters offers penny bets of 0.20 as well.

The cool, clear and gentle atmosphere of the ocean is represented on the reels with symbols that include a turtle, a seahorse, seashells, dolphins, yachts, Tang Fish and a School of Tangs. There are extra symbols as well such as traditional letter and number symbols so you have multiple opportunities to complete paylines and create matching combinations.

Many ocean-themed slots are fantasy games – take-offs of mermaids and ocean treasure hunts.  Crystal Waters, however, represents what’s beneath the surface of the ocean waves in a realistic fashion through lifelike imagery and genuine ocean colors.

The dolphin is the game’s wild symbol. The dolphin symbol emerges and reels two and four to substitute for any other symbol and create more completed paylines. Wins that include the Wild symbol are doubled.

The yacht is the game’s scatter symbol. Yacht symbols multiply the winning payout when at least three scatter yachts appear on the reels, in any position.  If you achieve those three scatters you’ll trigger the free spins bonus game which awards you 15 free spins.

During this free spins game a bonus fish will act as the substitute symbol whenever it emerges on the third reel.  The free spins retrigger whenever three scatter yachts appear on a free spin.

The free spins can keep retriggering over and over again and any wins that you achieve on a free spin are real money wins which means that you collect the payouts without any need to place real money wagers on those spins.

The appearance of the bonus fish signals a double, quadruple or 8x multiplier on any win. The multipliers can b added, one on top of the other, up to 16x the winning payout.

The Crystal Waters progressive jackpot can be won at the end of any random spin.