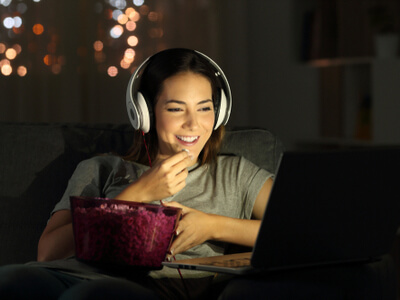 What is Sloto Cash Online Casino?

SlotoCash online casino is known in the casino industry as a casino venue that offers much more than high quality online gaming action. The casino site provides hundreds of different options for gaming entertainment along with a wide-reaching magazine that keeps casino fans updated about all different types of gaming entertainment.

Many players enjoy expanding their casino interaction by learning about different aspects of the gaming world. You can simply concentrate on your games but you might also enjoy spinning the reels while you watch or listen to media about gambling.

You can even combine the two and play your favorite SlotoCash online casino games while you watch movies devoted to gamers and gaming.

Almost every gamer has his or her favorite gaming movie genre -- humorous movies, movies of suspense, movies that take you on an adventure, etc. But as with any other type of movies, not all gaming movies are good quality or hold your interest.

What are some of the best movies for gamers of the modern gaming era?

Scott Pilgrim vs. the World

Scott Pilgrim vs. the World combines action, fantasy, melodrama and comedy in a farce that focuses on Scott Pilgram confronting his new girlfriend’s (seven) exes. The storyline takes place while within a world in which the characters immerse in music videos, video games and comic book iconography.

At its heart Scott Pilgrim is a romantic comedy. Pilgrim plays with the Sex Bob-Omb, an indie garage band. Scott meets Ramona, an Amazon delivery girl and pursues Ramona and is attacked by Ramona’s ex-boyfriend. He then learns that in order to continue to date Ramona he must defeat all six of her exes.

Slowly, Pilgrim works his way through the evil exes, is killed, comes back to life and, of course, ends up with Ramona.

This is not a movie for the intellectual crowd but anyone who wants a bit of a fantasy adventure should give it a go.

Pixels follows a group of aliens who intercept video feeds of classic arcade games. They believe that these messages are a declaration of war and they attack Earth with the games as their models. President Will Cooper understands that the only way to confront the aliens successfully is to employ a similar strategy so he recruits his friend Sam, a former video-game champ, to command a group of old arcade players, along with a military specialist. The team engages in an all-out battle to meet the aliens on their own terms and save the planet.

WarGames was a Cold War techno-thriller that combined elements of what was science fiction in 1983 with politics, sabotage, suspense and intrigue. The movie stars a young Matthew Broderick as a young hacker who unwittingly gains access to a US military supercomputer that will, when activated start a nuclear war with the Soviet Union.

For those who remember – or those who know history – Russia was, until 1990, a communist dictatorship and America’s most fervent enemy. War Games was set in the closing years of the Soviet empire when systems engineers programming the missiles that were set to strike Russia in case of an attack decided to automate the missiles by giving control to a supercomputer known as the WOPR (War Operation Plan Response).

When high school student David Lightman goes looking for a computer game he fast-dials a games company and receives game ideas that include checkers, chess, poker and backgammon. The list of options goes on to include "Global Thermonuclear War" and "Theaterwide Biotoxic and Chemical Warfare”. Using information gleaned about the "Falken's Maze" game, David guesses the system password, eners the system and starts playing Global Thermonuclear War – for fun.

Unfortunately, in the process David has connected to the WORP and as he plays as the Soviet Union, attacking American cities, NORAD military personnel become alarmed that actual Soviet nuclear missiles are inbound. Even after David finishes his gaming session WOPR continues the simulation because it’s still “playing.” As NORAD receives “information about Soviet bomber incursions and submarine deployments, the chances that WWIII will be triggered become very real.

Once NORAD understands that the missile strikes that they see on the computer screen are, in fact, a “game,” they stand down but the WOPR computer tries to launch the missiles itself. Only after David succeeds in having the computer lose at a game of tic tac toe does the danger subside. The computer itself concludes that “nuclear war is a ‘strange game’ in which "the only winning move is not to play" and moves on to offer to play "a nice game of chess".

The Wizard didn’t receive good reviews when it was released but over the years it has garnered a cult following. The movie follows Jimmy Woods, a young boy who is still reeling from the death of his twin sister, Jennifer, following a drowning. When Jimmy’s father decides to commit Jimmy to an institution hs older brother, Corey, runs away with Jimmy and they start walking to Los Angeles.

A young girl that they meet on the way discovers that Jimmy is a natural video gamer and she convinces him and Corey to head to  the “Video Armageddon” tournament. They start out on their trip with Jimmy funding the journey through his gaming skills.

Numerous adventures following the youngsters on their way to the tournament where Jimmy plays the new Super Mario Bros. 3 and wins.

With the money earned the young adventurers head back to reality.

The movie 21 is based on the book Bringing Down the House. The film tells the story of a group of MIT students who were able to employ statistical analysis and create a successful card counting operation to win at blackjack in Vegas casinos. The team operated in a professional manner, winning game after game until the casinos caught up with them and banned them from further play – but not before they had earned millions of dollars.