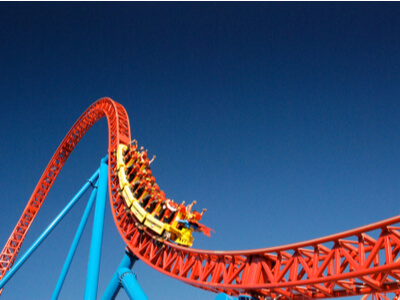 How Do You Celebrate National Roller Coaster Day?

There are many ways to maximize the warm summer days – head to the beach, relax on your porch with some online casino gaming entertainment, do some gardening or organize a picnic with your family and friends. If you’re interested in some real fun and excitement, take an excursion to your nearby amusement park and celebrate National Roller Coaster Day with some pulsating action that is sure to  get your heart racing and your adrenalin rushing.

Regardless of whether you’re a thrill seeker or you enjoy sedate entertainment you’ll find a connection to history along with 21st century exhilaration at your local roller coaster.

Roller Coaster Day commemorates the first vertical loop roller coaster that was patented in 1898 by Edwin Prescott. Prescott wasn’t the first to introduce the roller coaster though – that is believed to have begun in the 17th century with “Russian Mountains” in which Russians created ice slides in St. Petersburg and then sent wheeled carts or sleds down those slides that they had reinforced with wooden supports. These Katalnaya Gorkas – “sliding mountains" were set up in St. Petersburg. They could go as high as 80 feet and the drop could be as deep as 50 degrees.

The wooden slides were popular among the Russian aristocracy and Catherine II had the sides built next to her palace along with a pavilion where people could drink tea after the slide. In fact, in many languages, roller coasters are still called “Russian Mountains” though the Russian term for roller coaster, ironically, translates as "American mountains."

From Russia the roller coaster immigrated to France via Russian soldiers who occupied Paris after the Napoleonic Wars. An amusement park, the Parc Beaujon, featured “Aerial Strolls” – wheeled cars that were towed to the top of a tower and then released to descend. Other such attractions opened in Paris and then in Copenhagen  By the 1850s roller coasters were being built in the United States where they were accessible to working class families though many people found them to be dangerous.

Safer roller coasters started to be built after WWI but during the Depression, demand fell and roller coasters didn’t experience a resurgence of popularity until 1957 when Disneyland introduced the Matterhorn Bobsleds which featured a tubular steel track. As opposed to conventional wooden rails, the steel tracks allowed new designs such as corkscrews, loops and inverting elements.

National Roller Coaster Day was initiated by LaMarcus Thompson who brought roller coasters to Coney Island in the late 19th century. He sparked American’s love of amusement park rides with his Switchback Railway that traveled 6 miles per hour and spanned 600 feet. The ride quickly because wildly popular and, at 5 cents a ride, bought in an average of $600 per day. Thompson himself became obsessed with roller coasters and continued to design roller coasters in other areas of the country including those that featured painted scenery and dark tunnels.

Some things that you might not have known about roller coasters:

Best Roller Coasters in the World

Space Mountain roller coasters are found at both Disney World in Orlando Florida and Disneyland in Anaheim California. They are iconic and their design -- encased white-spire structures that were once futuristic and are now quaint – brings an air of mystery as they are conducted mostly in the dark. At speeds of 27 mph (Florida) and 32 mph (California), they aren’t a popular choice for thrill-seekers. Just good, smooth fun.

Millenium is the tallest (310 feet) and fastest (93 mph) complete-circuit coaster which towers over the park and the surrounding area.

The Cyclone at Luna Park on Coney Island was built in 1927 and stands as testament to the fact that older is sometimes better.