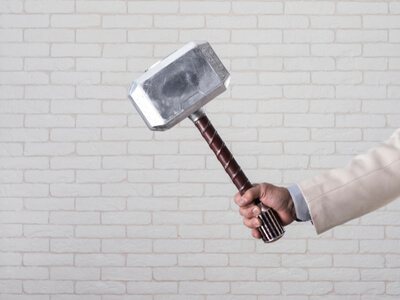 The astounding success of the Asgard online slot was the driving force behind RealTime Gaming’s newest Norse mythology themed slot, Asgard Deluxe. Norse mythology has always provided a folklore that is more relatable  than other fables. With Asgard Deluxe online casino slots gamers can enjoy ancient legends that still resonate today with human-like gods whose foibles are similar to those of real humans.

Asgard Deluxe online casino delivers all of the fun and excitement of the original Asgard slot machine along with a top payout of 2000x the base bet, four free spin game options and 243 Ways to Win on every spin.

Norse mythology is different from Greek mythology – while both traditions are built on the lores of the power of great gods over mortals, the actions of the Norse gods are closer to the quirks and idiosyncrasies of humans. Norse gods get hurt, they get hungry and, more important, they die.

Students of ancient mythologies look at Zeus (Greek) and Odin (Norse) to highlight some of the differences between Greek and Norse  folklore.  While both are “all father” gods, Zeus likes to assert his power. He is promiscuous and even heads down the mountain for rendezvous with human women. While both Zeus and Odin are arrogant, Odin is willing to acknowledge his weaknesses which is something that one would never see from Zeus.

Norse mythology encompasses the legends and traditions of the North Germanic peoples. Even after Scandinavia became Christian, the Norse folklore continued with stories of beings, heroes and deities of the pagan era.

Probably the best known of the Norse gods was Thor, the thunder-god who fights his foes for the good of humanity.

Odin was equally as powerful but he was both revered and feared as a deity who could pursue knowledge through the worlds made possible by the slphabet.

Freya, a beautiful feather clock-clad goddess rode into battle while the son-god Loki brought tragedy to the gods after he engineered the goddess Frigg’s son’s death Baldr.

As Christianity spread to Northern Europe, the new Christian Church adopted the idea of an afterlife which was a core principle of the region’s pagans. To become as attractive as possible to as many people as possible the church absorbed the local beliefs and customs.

This can be seen in the adoption of saints into Christianity. Since Christianity taught that there was only one god, with the angels as heavenly manifestations, in areas like Northern Europe where Norse mythology reigned, the pagan gods became Christian saints. Then, the local population was encouraged to worship them as intermediaries to Jesus. The idea of the Trinity – three parts of one god – expresses this type of polytheism.

One of the central beliefs of Norse mythology involves the celebration of the Nine World which encircle the Yggdrasil sacred tree. Elements of Norse mythology reach as far back as Proto-Indo-European mythology and interest in this ancient folklore has been revived among those who follow Germanic Neopaganism, science fiction aficionados, fantasy literature enthusiasts and role-playing and slots gaming fans.

This became obvious when the popularity of the original Asgard online slot exploded. Now, the SlotoCash casino features a follow-up to Asgard, Asgard Deluxe, which is even more action packed and delivers even more prizes than ever.

Join Thor, Odin, Freya, Loki and other symbols of the upper world of Asgard as the symbols line up on the Asgard Deluxe’s 243 PayWays to trigger completed combinations and activate lucrative payouts. Asgard Deluxe includes all of the favorite highlights of the original Asgard game plus 243 Ways to Win lines and other fun-filled features.

Asgard Deluxe is available at the SlotoCash Casino’s Free Mode where you can play for free. Alternately, you can go into the Real Mode and place a low-budget deposit or a high-rolling bet to play for real money. There’s a top payout of 2000x your wager so this is a game in which you can reach for the stars.

The Asgard Deluxe slot machine is mobile-enabled. You can play it on your PC or your smartphone or tablet screen. You don’t have to bet on each individual payline in this game because it’s 243 Ways to Win game – you bet on each spin and then collect the global payout based on how many matching symbols appear on the entire spin.

The opening sequence of Asgard Deluxe will allow you to get in the mood for the game with a brilliant video that takes you right into the heavenly Asgard fortress of the gods. The fortress provides the setting upon which symbols of Norse mythology appear on the pay ways to line up and create winning combinations.

Throughout the spins random multipliers, morphing wilds and bursting wilds emerge, providing more ways to create the wins and multiply those wins over and over again. Entire reels turn wild in which matching symbols substitute and ensure extra wins.

The Yggdrasil tree is the game’s scatter symbol. If your regular game spin brings up three scatter symbols, you’ll collect the scatter combination payout which is  based on the bet that you placed on the spin that resulted in the scatter symbol combination. In addition, you have your choice of four game options – on this machine, the machine doesn’t decide which free spins round you get – you do!

SlotoCash promotional bonuses, including a Welcome Bonus for new players, cash back deals for everyone, comp points, daily bonuses, weekday bonuses and other match gaming credits are added to the regular Asgard Deluxe multipliers and bonus round to provide more chances to achieve more lucrative winning payouts.

Collect cash prizes and have a fun-filled gaming adventure as you exlore the ancient legends of the Norsemen when you play the action-packed Asgard Deluxe online slot at the SlotoCash Casino.