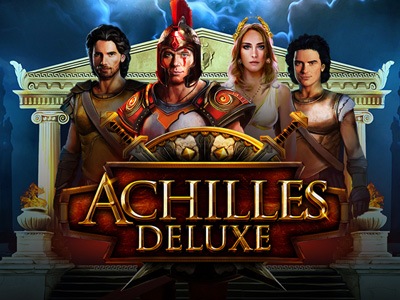 When we use the term “Achilles heel” we refer to a weakness that can lead to a downfall. Our love of sugar can lead to obesity, our enjoyment of streaming videos can lead to lack of physical exercise and so forth. The term is derived from the story of Achilles, a Greek warrior who fought in the ancient Trojan War.

Today the story of Achilles continues to fascinate modern historians and mythology enthusiasts. You can explore the legend of Achilles while you win cash prizes when you play Achilles Deluxe at the Sloto Cash casino.

Achilles is remembered today as a mythical warrior but his connection to gaming is famous as well. In the 5th century BCE Exekias painted Amphora and Ajax playing a board game with Achilles, marking him as one of the earliest competitors of leisure pastimes in history.

The story of Achilles was recorded by Homer in The Iliad, the ancient world’s most definitive account of the era of the Trojan wars.  Achilles was the greatest Greek warrior during that period and The Iliad’s verses record his actions as he led the army of Agamemnon against Troy.

Achilles started out life as the son of Peleus, king of the Myrmidons. Peleus was a mortal but his mother Thetis was a sea nymph and Thetis raised Achilles to be a brave and loyal soldier.   To make her son invulnerable, Thetis dipped him in the River Styx – in holding him by his heel, she prevented that part of him from becoming invulnerable – thus, the “Achilles Heel.”

Achilles went to war for Greece and led the army of Agamemnon to victory after victor before being slain by an arrow guided by Apollo.

Now the  drama of one of the Iliad’s most famous and compelling accounts of the Trojan war is immortalized in the Achilles Deluxe online slot that gives players the chance to relive that era of history with spins, wins, bonuses and real money excitement.

Achilles Deluxe is one of the newest and most compelling of RealTime Gaming’s recent releases. It takes the player back to the time of the Trojan war when the ancients fought decades-long wars to determine supremacy. Achilles was originally released by RTG in 2012 but now gamers can enjoy the improved deluxe version which features extra elements, extra bonus rounds and extra fun.

Play Achilles Deluxe and join the famed Greek warrior as he takes on Troy one more time. There’s an army of features in this game including progressive jackpots, multipliers and 20 paylines for maximum win potential. There’s a 2000x max win which allows Achilles to go the length. The goal of the game is to spin the matching combinations that will allow you to breach the walls of Troy and attain free spins where double and triple multipliers await. More surprises are in store with two separate progressive jackpot prize options.

This is a suitable game for high-stakes VIP gamers and budget players alike. You can enable as many or as few of the paylines as you like with bets ranging from $0.01 up to $5. The Major jackpot and the Minor jackpot can be awarded at any time during the regular game spins.

Achilles, Paris, Agamemnon and the famous Helen of Troy return to the gaming screen in this slot machine upgrade. The Trojan War, once believed to have been a legend but now proven to be a historical fact, is refought in ultra High Definition display along with a Wild game logo, a Shield Scatter symbol and plenty of Royal Card Suits from Ace on downward. All this is surrounded by a Greek Temple that sets the stage for the action to come.

As the symbols emerge on the reels you’ll determine whether you achieve high-payout symbols or low-payout symbols. The shield is both the Wild and the Scatter in this game – as the Wild it substitutes for other symbols to complete paylines while as the scatter it will trigger the Free Spins when ever three or more scatter symbols appear on a spin. Once you enter the Free Spins you’ll be invited to choose one of three Trojan horses which then determines if you will receive 15, 20 or 30 free spins. All free spins wins payout with a triple multiplier.

If you achieve three scatters on a free spin the free spins round will reactivate and you’ll receive another round of spins where you can spin the reels for free and collect the resulting real money wins.

A second free spins feature is triggered by 3 or more Logo symbols. There’s a whole other round of free spins in the 2nd free spins game though free spins wins that result from this round give you only a double multiplier on your wins.

The random progressive jackpots can be won by any player who adds a jackpot bet to his regular game wager. It’s a game within a game so you don’t have to play……but for a small jackpot bet, you have the chance to achieve the multi-huge jackpot prize!

Helen of Troy was said to have been so beautiful that her face launched a thousand ships. You may not have lived to see Helen but now you can play the Achilles Deluxe and launch 2000 wins or more with spins, random jackpots, free spins rounds and more. Achilles has indeed returned and you’ll reap the rewards of his hard work when you play the Achilles Deluxe online slot.