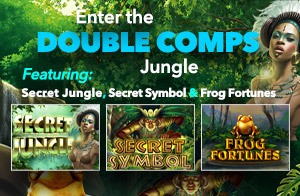 Get ready to play three of our most exotic slots and take a wild ride through the jungle. You’ll be instantly earning double comp points while you play these games for the whole month of August!

Comp Points are rewards you earn simply for playing your favourite games. For every 100 comps earned you will get $1 and for the listed games in this pack you'll get $2! Learn all about Comp Points HERE

Convert your extra comp points into cash and compete for the ultimate prize this month!

Secret Jungle: A mystery-laden 50-line pokie with mystical jackpots to be won! The Wild Symbol is a golden Idol that appears in all reels which will replace all other symbols except the scatter. All prizes are TRIPLED when the Idol is involved!

Secret Symbol: A 25-line pokie set in the Aztec jungle. Every potent free spin will unveil a new prize multiplier up to 20x! While Aztec Chief Wilds also expand to cover their entire reel during free games!

Frog Fortunes: This pokie has 243 ways to win with a 5x3 grid like no other. When there are winning combinations after the Exploding Symbol, the winning symbols will be removed to leave room for new symbols to fall in their place, allowing more winning possibilities to emerge! 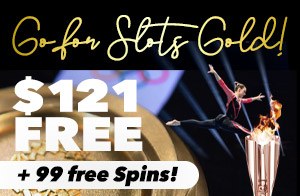 As the Olympics get underway in Tokyo this summer, it’s time for Sloto players to also partake in the excitement and go for the gold!

Sloto’Cash players will be representing the best of the best all through the month of August as they aim for the highest jackpot wins with a 1st 150% Match plus 33 Free Spins, continue with a 2nd 200% Match plus another 33 Spins and finally, accept the gold medal with a $121 Free Token + 33 Free Spins!

Step up to claim the coveted gold this August as you play the popular Achilles Deluxe slot! 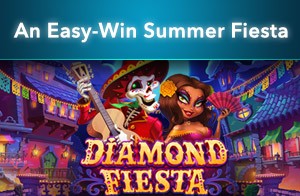 Summer is all about having fun and what could be better than spending the season in an Easy-Win Fiesta?

Get ready to hit some blazing wins when you deposit as low as $25 to join and spin the Diamond Fiesta with up to 100 Spins with a small 10x roll over requirement!

This is a 50-line slot with several impressive features that will keep you rewardingly busy!

Wild symbol – Señor Skeleton substitutes for all symbols except scatters and appears on reels 2, 3, 4 and 5.

Scatter – Get 3 scatter Skulls anywhere on the reels to trigger the Free Games feature below.

Free Games Feature – Get 6 Free Games with extra Diamonds, Señor Skeletons and Skulls (scatters) added to the reels. Extra Free Games are added when 3 or more Skulls appear on a spin!

Jackpot Diamond Feature – Trigger it by landing 6 Diamond symbols anywhere in a spin. You receive 3 re-spins will all Diamonds held in place. New Diamonds appearing are held for subsequent re-spins. Get a Diamond on the four corners of the reels to trigger the feature below.

Expending Reels Feature – See the 5x3 pokie reel expand up to 8 reels with 4 rows each!

Mini, Minor, Major and Grand Jackpots – These appear during the Jackpot Diamond Feature. After the feature is over, see each held diamond explode with a coin prize. The mini and minor jackpot can be won in any grid, while the major and grand jackpots appear only in the 8x4 grid

The summer fiesta doesn't get better than this and everyone’s invited!

Offer holds a reduced roll over of 10x on spins winnings ONLY. All deposit bonuses hold no max cashout.